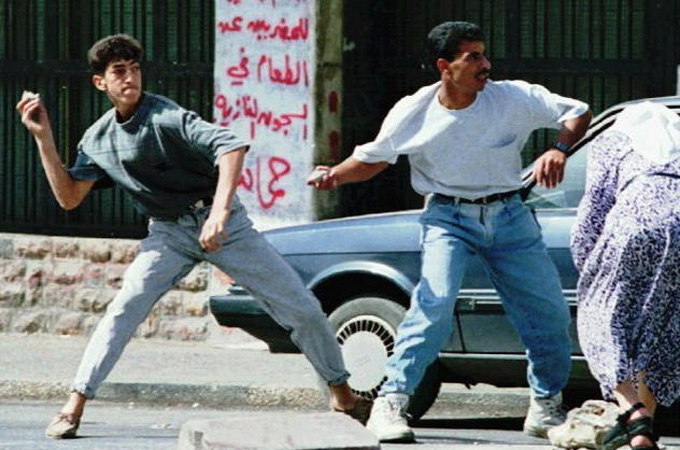 European politician Paul Murphy has come under criticism from his colleagues in the European Parliament after he called for the Palestinians to start an intifada against the Israeli Occupation during a recent TV interview.

Murphy has been a member of the Parliament since 2011 and is a vocal opponent of the Israeli occupation of Palestine. He joined an aid flotilla to the Gaza strip in 2011 that was intercepted by Israeli security forces.

A socialist MEP from Ireland, Murphy is cynical of the most recent revamp of peace talks and does not believe that Israel is interested in a viable Palestinian state. He has come under fire from his fellow MEPs for his belief that a redeveloped struggle, similar to the first intifada, could link up the Israeli left and working class with the Palestinians to overthrow “the capital establishment of Israel”.

“There are many positive examples from the first intifada of mass protests, strikes and marches and checkpoints that I think would be ideal tactics to redevelop now,” Murphy said. “I think a mass struggle from below, a Palestinian spring, with democratic committees of struggle, is absolutely necessary now in order to fight against poverty, oppression and for a viable Palestinian state.”

His calls come as resumptions of peace talks take place for the first time in three years which aim to achieve a “final status” deal within nine months. Prior to 2010, peace talks had collapsed partially due to Israeli settlement building in the West Bank and East Jerusalem, which Palestinians want for a state that would include the Gaza Strip and all territories captured by Israel in the six day war in 1967. The international community and international law do not recognise Israel’s annexation of the land.

“A lot of the violence happening in Israel and Palestine is perpetrated by the Israeli state, I believe the Palestinians have a right to defend themselves against that aggression,” Murphy told Al Jazeera. “That may involve armed defense against soldiers and I wouldn’t have a problem with that.”

Murphy has been lambasted by several of his colleagues in the European Parliament for his views. UK Conservative Charles Tannock said comments like this would “only result in futile and needless violence” and that it would be a “massive setback” for peace talks.

Irish MEP Sean Kelly who expressed his disdain at Murphy’s comments. “In a region already beset with conflict, it is abhorrent to call for violence as a tool to achieve collective goals,” Kelly told Al Jazeera. “The only route to a peaceful settlement of the Israeli-Palestinian conflict is through dialogue and compromise on both sides.”

Kelly also drew parallels between the Israeli-Palestinian conflict and the struggle in Northern Ireland suggesting that the two have similar narratives and therefore the same solutions could be implemented in finding peace.

“We have a successful model in the Northern Ireland Peace Process, which makes it all the more abhorrent that Mr Murphy, who as an Irish citizen has benefitted from this process, is now calling for violence elsewhere,” Kelly said.

Murphy responded to his critics by calling for a reevaluation of what they consider an intifada to be.

“The MEPs who have condemned my call for a mass movement along the lines of the first intifada as a call for violence and terror are either deliberately misconstruing my words or are entirely ignorant about the history of the Palestinian struggle,” Murphy said. “Intifada is simply the Arabic word for ‘uprising’, something that is entirely justified and clearly necessary when you look at the ongoing oppression.”

Intifada is an Arabic word which literally means “shaking off”, though it is popularly translated into English as “uprising”, “resistance”, or “rebellion”.

According to the Israeli human rights group B’Tselem during the first intifada which began in December 1987, 1,376 Palestinians and 94 Israelis were killed. Between September 2000 and October 2012, 507 Israelis and 6561 Palestinians have been killed in the region.

UN resolution 3246 from 1974 weighs in its support of an armed Palestinian struggle reaffirming “the legitimacy of the peoples’ struggle for liberation from colonial and foreign domination and alien subjugation by all available means, including armed struggle” and “strongly condemns all governments which do not recognise the right to self-determination and independence of peoples under colonial and foreign domination and alien subjugation, notably the peoples of Africa and the Palestinian people”.

Israel has been criticised for its policies in more than 100 UN resolutions and is on record for being the country that has broken the most UN resolutions since the UN was founded in 1945.

Murphy believes the EU is complicit in the oppression of the Palestinian people, saying “The EU cries a few more crocodile tears than US imperialism, but politically and economically it supports the Israeli elite.”

“Israeli armaments companies, such as Elbit and Israel Aerospace Industries, are recipients of funding from the EU,” he said.

Trade relations have been upgraded between the EU and Israel, effectively integrating Israel into the “single market”. Murphy believes that this is a political statement of support for the Israeli establishment which effectively turns the other cheek to the oppression of Palestinians.