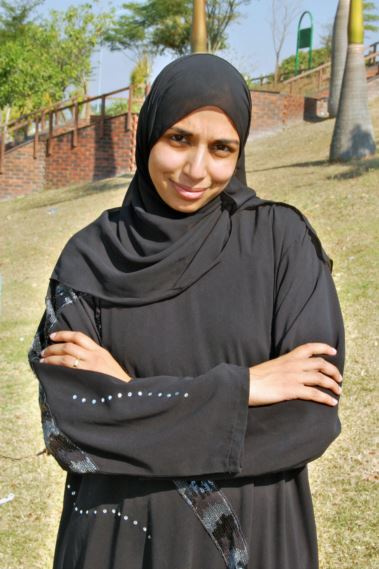 At Porcupine, to celebrate Women’s month, we will be adding two of our most successful writers to our featured author’s page. Here’s more about our second author. One of the author’s from Why Israel. (Click here to view sample chapters)

Originally born into a Hindu family, Suraya Dadoo embraced Islam at 18. She is a researcher for the Johannesburg-based advocacy group Media Review Network (www.mediareviewnet.com). She focuses on the impact of the Israeli occupation on Palestinian media, education, healthcare, and family life. Her articles have appeared in local and international publications, such as The Sunday Independent, The Star, Daily News, Cape Argus, Electronic Intifada, and the Washington Report on Middle East Affairs. She is also the co-author of the recently-released Why Israel? The Anatomy of Zionist Apartheid: A South African Perspective (Porcupine Press, 2013). She holds a Masters degree in Sociology from Rhodes University. She is married, has two children, and lives in Lenasia, Johannesburg.

We asked Suraya to write a short piece about herself and her writing:

In 2003, I joined the advocacy group, Media Review Network (MRN) as a researcher. A key part of MRN’s work has been to challenge the Israeli narrative on the Israeli-Palestinian conflict. With the publication of every opinion-piece, or broadcast of every radio interview that exposed Israeli brutality and Apartheid measures against the Palestinians, South African supporters of the Israeli state asked us the question: “Why Israel?” Why do you people always pick on Israel? ”

Three and a half years ago, my colleague, Firoz Osman, a Pretoria-born, Egyptian-trained medical doctor, and I decided to comprehensively answer their question by examining how and why Apartheid applies to the situation in Palestine. The dictum “Apartheid: wrong for South Africans, wrong for Palestinians” guided us.

The world sees Israeli casualties of Palestinian armed resistance citizens – whether they are settlers or soldiers – in a humane way. Their funerals are usually shown and one hears from their grieving families. We learn their names, hopes, dreams, where they came from, and other personal details. In short, people can identify with them. Palestinian victims of Israeli state terrorism, however, are seen as keffiyeh-clad terrorists “who deserved to die”. We do not learn their names, see a funeral, or are exposed to the grief of the family. We don’t learn that many of them were shot in their own homes, backyards, or on their way to school. Their humanity is never revealed and we cannot empathise with them. Their deaths are simply a statistic.

We wanted to show the other side of this conflict – the Palestinian side – which has been completely ignored by mainstream media outlets. What is life like for Palestinians? How similar is the treatment of Palestinians to that of blacks in Apartheid South Africa? Why have Palestinians resorted to the armed struggle? We wanted people to understand the true nature of the peace process; the laws in modern-day Israel that are so reminiscent of Apartheid South Africa; the daily humiliation that Palestinians face; and how Israel’s lobbyists throughout the world (including South Africa) have maintained Israel’s reputation – in spite of its Apartheid policies.

Accessibility remained the key issue for us. While there are many excellent academic works about Israeli Apartheid and its atrocities, these books have limited readerships. So, in between patients (for Firoz) and school rounds, swimming lessons and countless other errands (for me), we accessed academic analyses, online commentaries, articles and blogs of well-known and highly-respected Palestinian activists and human rights organisations, as well as reports from a wide range of Palestinian and Israeli NGO’s.

Hundreds of late nights later, the result is a comprehensive, easy-to-understand investigation of Israel’s colonisation of Palestine.

Why Israel? has been a long, difficult journey. It is easy for people to become statistics and for one to become desensitised. One of the most difficult chapters that I worked on, was Israel’s imprisonment of women and children. Children as young as 11 are removed from their homes in the dead of night, interrogated without the presence of a parent or lawyer, and forced to sign confessions in a language they don’t understand. The emotional reality dawned on me: that that could have been my 11-year old. That could be your 11-year old too. It was also difficult being separated from my children when research for this book took me very far away from home.

Given the controversial nature of the subject matter we were dealing with, our work has been carefully footnoted, with a full-colour photo essay, powerful quotes in side-bars, a detailed bibliography, index, and a list of useful websites and resources. I hope it is useful to high-school and university students, academics, journalists, government officials, researchers, and Palestinian solidarity activists. In fact, our hope is that the book becomes an indispensable guide for anyone wanting to fully understand the realities of the Israeli-Palestinian conflict.

Inevitably, there will be those who will take issue with our sources and arguments, and claim that we are biased. They will argue that this is a complex conflict with a simple solution: the Palestinians need to accept the two-state solution and peace will prevail. This is certainly not the case. Israel is an occupier. It is a coloniser, an Apartheid state. The central issues in the Israeli-Palestinian conflict have always been the dispossession of the Palestinian people from their land and property, and the denial of the right of Palestinian refugees and their descendants to return to their land to live in peace and security as equal citizens.

The main aim of this book is to stimulate discussion, debate, and understanding of this fundamental question, and the multitude of issues associated with this protracted conflict. We hope that this book goes some way towards achieving this understanding.

Why Israel? is available from Porcupine Press, Amazon.com (Kindle Version), Kalahari.com andExclusives.co.za. The book is also available at all good bookstores.