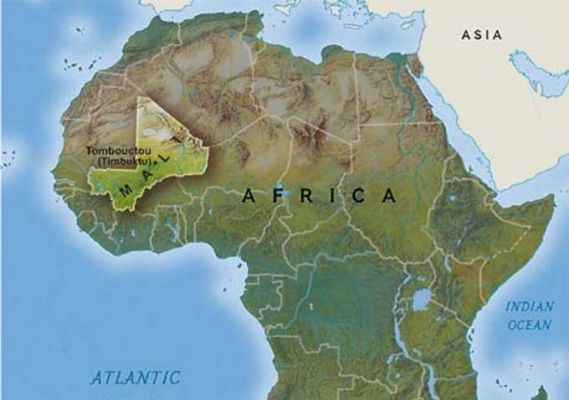 The French intervention in Mali, followed by the bloody siege in Algeria, represents a turning point in what has emerged as a new imperialist scramble for Africa. With these events, following on the heels of the US-NATO war for regime-change in Libya and the Washington-backed sectarian civil war in Syria, mankind is witnessing a convulsive drive by the major powers to re-divide the world, its territories, markets and resources.

There is every reason to believe that this campaign to re-colonize much of the planet will be even bloodier and more oppressive than the original colonization of Africa.

As in the Libyan war, France has taken the lead in unleashing fighter bombers and deploying its dogs of war, the French Foreign Legion, in Mali. However, the other major imperialist powers have made it clear that they will not remain on the sidelines.

Britain’s Prime Minister David Cameron vowed that the UK will “work with others to close down the ungoverned space” in northwest Africa “with all the means that we have.” Terming the developments in Mali and neighboring countries a “global threat,” Cameron declared they would “require a response that is about years, even decades, rather than months.”

The Obama administration initially adopted a cautious approach to the Mali events, no doubt out of concern that it could end up helping an imperialist competitor and undercut its own predatory aims in Africa. However, with the Algerian hostage crisis, which claimed the lives of at least 80 people, including three Americans, Washington has made it clear it intends to intervene aggressively.

US Defense Secretary Leon Panetta commented last Friday: “We have a responsibility to go after Al Qaeda wherever they are. And we’ve gone after them in the FATA (Pakistan’s Federally Administered Tribal Areas). We’re going after them in Yemen and Somalia. And we have a responsibility to make sure that Al Qaeda does not establish a base for operations in North Africa and Mali.”

The message was unmistakable. Mali and the region are to be turned into a new front in the global US killing spree, to be carried out in the first instance with Predator drones and Hellfire missiles.

The US has also announced that it is sending US Special Forces troops as “trainers” and “advisors” to the six countries—Niger, Nigeria, Burkina Faso, Senegal, Togo and Ghana—which are to provide the troops for an African force being cobbled together by the Economic Community of West African States (ECOWAS) as a proxy for imperialist intervention. It will also provide aircraft to deliver them to Mali.

So much for Obama’s inauguration rhetoric. “A decade of war is now ending,” he declared Monday, just a day after Cameron’s warning that decades of war in Africa have only just begun.

We have entered a period when each new war only begets the next: Libya, Syria and now Mali in the space of less than two years.

The connection between them is rarely recognized in the media, which breathlessly reports each new crisis, from the fighting in Mali to the hostage drama at the gas complex in Algeria, as if it were a senseless outrage explicable only as part of the unfolding battle between good and evil known as the global war on terrorism.

The word “blowback” is not to be uttered in the polite company of network news. Yet this is precisely what is involved. The US-NATO war for regime-change in Libya destabilized the entire region. It had the effect of sending Tuaregs, many of whom who had served in Gaddafi’s security forces, fleeing back into Mali under conditions in which Libya’s NATO-backed “revolutionaries” were hunting down and murdering people with black skins.

The Tuaregs, a nomadic people of the Sahel, the region on the edge of the Sahara desert, are to be found in northern Mali as well as Niger, Algeria, Morocco, Libya and Burkina Faso.

In Mali, oppression and neglect by the central government led to four major revolts since independence in 1960. Similar revolts took place in neighboring Niger. The arrival of Tuaregs from Libya, together with large quantities of Libyan weapons, triggered the latest revolt, which was swelled by the wholesale defection of Tuareg troops and officers from the Mali army.

The secular Tuareg nationalists, however, were quickly supplanted by better armed and funded Islamist forces. Immensely strengthened by the US-NATO war in Libya, where they were armed and backed by Washington as proxy ground forces against Gaddafi, they are now being similarly armed and funded as shock troops in the war for regime-change in Syria. It has become impossible to understand US policy in the Middle East and Africa without recognizing that Washington operates in a de facto alliance with Al Qaeda-linked forces.

Al Qaeda in the Islamic Maghreb (AQIM), the new “war on terror” bogey man, is, like its predecessor in Afghanistan, a Frankenstein monster of Western imperialism. It emerged from forces that had traveled to Afghanistan with US support to fight the Soviet-backed regime in Kabul in the 1980s, and then returned home to fight the bloody Algerian civil war of the 1990s, when US and French imperialism backed the Algerian military in seizing power to prevent the election of the Islamic Salvation Front. In the repression that followed, over 100,000 Algerians were killed.

The Algerian government has charged that AQIM, like the US-backed “rebels” in Syria, is funded by Washington’s key ally, the Gulf sheikdom of Qatar. And before the present conflict, it was well known that AQIM and similar groups enjoyed the tacit approval of Mali’s US and French-backed central government, which saw the Islamists as a useful counterweight to the Tuaregs.

Now we are asked to believe that this same force has become a “global” threat that may at any moment attack “the homeland.”

The escalating war in Africa is neither about terror nor Al Qaeda. Timemagazine succinctly outlined the real motives in Mali: “The dangers expand elsewhere, with huge oil reserves attracting Western companies to set up production across the vast Sahel. South of Algeria and Mali sits Niger, a dirt-poor desert country with the world’s fourth largest output of uranium, which supplies France’s crucial network of nuclear-power stations. East of Algeria is Libya, where a number of Western companies exploit some of Africa’s biggest oil reserves.”

US imperialism and the European powers that formerly colonized Africa are determined to lay hold of these resources. Having been supplanted by China as Africa’s single largest trading partner, and badly trailing Beijing in terms of growth in foreign direct investment, Washington and the European powers are turning to military intervention as a means of offsetting economic decline.

As with the inter-imperialist rivalries generated by the scramble for Africa over a century ago, the present conflicts over domination of the continent point toward the eruption of a new world war.