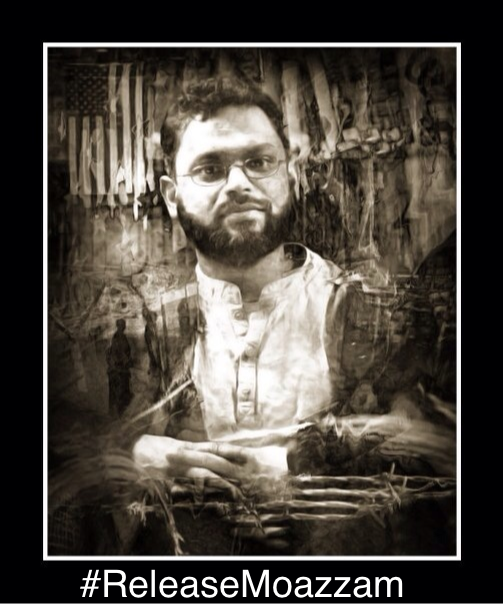 The Muslim Lawyers Association (‘the MLA”) is outraged at the arrest by British authorities, of Moazzam Begg (“Moazzam”), former Guantanamo Bay detainee and the Outreach Director of the London-based organization CAGE. It has been reported that Moazzam was arrested on “terrorism related charges” linked to his recent visit to Syria.

The MLA condemns the arrest. It furthermore condemns the paradigm, and the political and ideological agenda of the powers that be, that resulted in the promulgation of the “anti-terror” laws of the United Kingdom.

These laws are oppressive. They are designed to terrorise Muslims who understand their religion holistically and seek to express their Islam socially, politically and economically .The laws seek to distinguish between “good” Muslims and “bad” Muslims based on whether a Muslim is “secular” enough to be tolerated. They prevent freedom of religion and conscience and criminalize the actions of those wanting to rid the world from oppression. They are fundamentally at odds with the divine laws to which Muslims subscribe.

Moazzam, who toured South Africa in December 2013, is internationally recognized and acclaimed for speaking out against detention without trial, for advocating the God given right of due process and for campaigning for the rights of prisoners. His advocacy on behalf of the Guantanamo Bay and other “war of terror” detainees is globally recognized and has resulted in various governments accepting and giving refuge to ex- prisoners who could not be returned to their countries of origin.

Moazzam has made it his life’s work to advocate for the rights of those victims of the ‘war of terror’ who are tortured and incarcerated without being charged. He has never been a threat to the British government even after they collaborated with the US to maintain his detention without trial for 3 years.

Originally from Birmingham he moved to Afghanistan in 2001 with his family to open a school for girls. When the American and British invasion of Afghanistan commenced, he and his family fled to Pakistan. In January 2002 he was detained in Islamabad, Pakistan, as an ‘enemy combatant’ (of the U.S) and was moved to and incarcerated in the Bagram internment centre for almost a year before being transferred to Guantanamo. He was released in January 2005 and returned to the UK where he was again arrested before
being released without charge.

In July 2012 he visited Syria and met former prisoners who had been detained by the Assad regime. Then in October of 2012, he met both current and former prisoners and also visited refugee camps and witnessed the arrival of British “aid”. He wrote about his travels to Syria in a public blog entry on the CAGE website.

It is not insignificant that Moazzam’s arrest follows recent comments by UK. Home Office Minister James Brokenshire that the involvement of British citizens in the struggle to overthrow the Syrian regime formed a significant and growing area of focus for the British security services and his warning that concerns over ‘terror-related’ and ‘jihadi activity’ linked to Syria were ‘likely to be with us for the foreseeable future’.

This about turn is remarkable, even by Britain’s rather dismal standards in the areas of honesty and integrity. Not too long ago, the British Prime Minister sought parliamentary support for Britain to play an active role in supporting the opponents of the Assad regime. A few months later, when the self-same British government considered the possibility that a Shari’ah based government may succeed the oppressive Assad regime, it used “anti-terror” laws to criminalize active opposition to the Syrian regime. By adopting this
irrational stance the British government has intentionally extended the rule of the Assad regime and criminalized the actions of people who are willing to sacrifice their lives to resist oppression. By criminalizing legitimate resistance to oppression, the British government
has demonstrated yet again its culpable hypocrisy. It shouldn’t surprise though. Its role in the war of terror, its widespread use of torture and rendition and illegal detentions and the invasion of Iraq are testament to its aggression against justice.

Asim Qureshi, Research Director of CAGE, said: ‘CAGE calls on all defenders of civil liberties and the rule of law to stand up and protest against the serious curtailment of yet another victim. The message may be unpalatable to those who wish to shroud their abuse in secrecy but that can never justify an attack on the messengers.’

‘We are disgusted that Moazzam Begg is being retraumatised with the same guilt by association accusations that resulted in his unlawful incarceration in Guantanamo Bay. We fully support our colleague and see his arrest as politically motivated and as part of a campaign to criminalise legitimate activism.’

“Moazzam has been very open about his international travel and his objectives, including importantly exposing British complicity in rendition and torture. The timing of Moazzam’s arrest given his travel to Syria took place in December 2012 requires a detailed explanation. The timing coincides with the planned release of a CAGE report on Syria and a major news piece that was due to be televised soon. As with David Miranda it seems those who are engaged in exposing abuse of powers are targeted and smeared to prevent disclosure of vital evidence.”

These arrests are obviously attempted to deter any travel to Syria by labeling it as suspicious. Moazzam is not the first casualty of attempts of intimidation, harassment and freezing the assets of both Muslim individuals and charities involved in providing humanitarian aid to the victims of the Syrian crisis.

All that curtailing the aid to an already impoverished, starving and wounded Syrian population seeks to achieve is the creation of further desperation in an already volatile situation.

Legitimate concerns are being raised that both Police and security services are using terror laws to legalise otherwise illegal acts which are being taken by the establishment against anyone they deem to be a ‘terror’ threat.

1. CAGE (formerly known as CagePrisoners) is an independent advocacy
organisation that works to empower communities affected by the War on
Terror and to highlight abuses of prisoners’ rights.

3. For further information on the work of CAGE on Syria, please refer to
these articles by Moazzam Begg:

THE REAL REASON BEHIND THE CONFISCATION OF MY PASSPORT