Why Israel Reviewed by Zafar Bangash for Crescent International 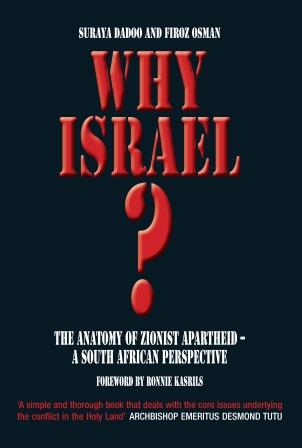 In their book, Why Israel?, Suraya Dadoo and Firoz Osman compare Israeli apartheid with that practiced by the apartheid regime in South Africa and not only find striking parallels but also the extreme form Zionist apartheid has taken. The result is an exciting and informative book.

There is no shortage of drumbeaters for the Zionist entity in illegally occupied Palestine. They are found in almost all media outlets in the West, especially in the US, as well as in sensitive posts in governments and political parties. The Israel-firsters’ task is to ensure that little or no exposure of Israeli crimes makes it to the public domain. The Holocaust is often invoked to justify Zionist crimes as if Hitler was a Palestinian and therefore, the Palestinians must pay the price for his crimes against the Jewish people.

In recent years, another dimension has been added to this campaign of blackmail. All criticism of Israel is immediately branded as “anti-Semitism.” It is not difficult to see why: when Zionist apologists cannot defend Israeli policies, they resort to name calling. It is a convenient way to divert attention from the real issue.

Many books written in the West attempt to project Israel as a “democratic utopia” surrounded by barbarians. Most Arabian regimes in the region are dictatorships — monarchical as well as republican — but this is not the fault either of the Palestinians or the larger Muslim/Arab population. These dictatorships without exception, are agents of the West and are also protected by it to ensure Israel’s survival.

There are few if any books written to explain the Palestinians’ point of view. Such Palestinian writers as the late Edward Said, Rashid Khalidi and others have not received as much attention as do Zionist apologists of every stripe. Former President Jimmy Carter’s 2006 book, Palestine: Peace not Apartheid, was widely acclaimed but Carter was also subjected to vicious attacks bordering on slander. Carter had to virtually apologize for writing the book. He was denounced as an anti-Semite for advocating peace between the Palestinian and Jewish peoples based on the recognition of Palestinian rights. Other brave souls include John Mearsheimer and Stephen Walt whose 2007 book, The Israel Lobby and US Foreign Policy created quite a stir in the US, especially among the Israel Lobby.

The book, Why Israel? South African perspectives on Zionist apartheid, by Suraya Dadoo and Firoz Osman breaks new ground and takes the debate to a much higher level. If there were no other books written about the Israeli apartheid regime and how it has systematically deprived the Palestinians of their most basic and fundamental rights, this book alone would suffice. It is not merely a book; it is an encyclopaedia of facts and figures spread over 660 pages that systematically and methodically peels the layers of deception from the ugly reality of life under Israeli occupation. It would serve as an excellent reference book in schools, colleges and other academic institutions to familiarize students with the grim reality of Zionist apartheid and the suffering of Palestinian people. Lay readers would find it equally informative.

In the introduction to their book Ms. Dadoo and Dr. Osman quote the anti-apartheid struggler and Nobel laureate, Bishop Desmond Tutu who during a visit to Jerusalem in 1989 equated Israel’s treatment of Palestinians to the treatment of black South Africans under apartheid. He said, “I am a black South African, and if I were to change the names, a description of what is happening in Gaza and the West Bank could describe events in South Africa.”

There is a massive amount of evidence available about the inhumane and barbaric conduct of the Zionist regime toward the Palestinians but its apologists seem shocked that the Israeli State is compared to the Nationalist regime of pre-1994 South Africa. There is also a worldwide campaign of boycott, divestment and sanctions (BDS) as well as Israeli Apartheid Week (IAW) at university campuses that was launched in Canada in 2005. Zionist apologists feigning disbelief ask, “Why Israel?” This book answers the question with stunning clarity.

In 12 parts, the authors systematically expose the crimes of the Zionist regime, its victimization of the Palestinians as well as deal with various Palestinian groups that are struggling to secure their rights and dignity. In Part 1, the authors expose how Zionism has manipulated Judaism to secure legitimacy for what is essentially a colonial settler enterprise that has nothing whatsoever to do with Judaism as a religion. Dadoo and Osman recount how and why the Palestinians were ethnically cleansed and expelled from their homeland. In the next two parts, the authors survey the various political parties in the Zionist State as well as Palestinian resistance movements whether secular or Islamic that emerged to confront it. In Part 4, the authors examine the broader Middle Eastern geopolitical landscape by examining the role of key countries.

It is in Part 5 that the authors address the issue of apartheid. While admitting that Israel’s treatment of Palestinians in the occupied territories is not identical to the apartheid  that was practiced in South Africa, there are certain startling similarities, with the Zionist regime using many of the same tactics favoured by the Apartheid  regime in South Africa.

In South Africa, the white minority did not ethnically cleanse the black majority the way the Zionists have done to the Palestinians. After its illegal creation through a colonial scheme engineered by Britain and facilitated through the United Nations — an illegal act that violated the UN Charter — the Zionist entity embarked on a policy of ethnic cleansing. A terror campaign was launched whose aim was to secure a “core territory” from where the Zionist enterprise would expand outward. The terror campaign was designed to force the Palestinians to flee; it worked against defenceless civilians.

Once the Zionist entity came into existence, it enacted laws guaranteeing any Jew living anywhere in the world the right to settle in Israel. At the same time, Palestinian refugees have been denied the right of return despite the fact that Israel’s admission to the UN in 1948 was predicated on the condition that the Palestinians would be allowed to return.

True, there are some Palestinians that live inside what is considered “Israel proper” but there are different legal systems for Israelis and Palestinians. Israeli laws pertaining to marriage, allocation of water, education and press freedom seem to be drawn straight from the statute books of Apartheid South Africa. House demolitions, forced removals and the arbitrary arrest and detention of Palestinian activists resisting oppression are routine. In some cases, Israeli apartheid is actually worse than that practiced in South Africa.

While citizens of Israel are entitled to vote, Palestinians are not part of the Jewish nation as defined by Israeli law and do not enjoy the benefits of Jewish nationality. Part 6 shows how, within Israel, Palestinians are treated as second-class citizens, subject to systematic discrimination in terms of political, economic, social, cultural and human rights. It is charitable to call Palestinians second-class citizens; the reality is they are fourth-class citizens if we consider the ethno-religious pyramid practiced in the Zionist entity. At the top of the pyramid sit the Ashkenazi Jews — illegal immigrants from Europe, Russia and North America — followed by Sephardic Jews from the Muslim East. Then come the Falasha (Ethiopian) Jews. The Palestinians are at the bottom of this heap.

Ms. Dadoo and Dr. Osman point out that “Apartheid South Africa became an international pariah, and was subjected to an almost complete political, social, cultural, economic, and military isolation.” The Zionist entity has escaped such opprobrium, largely because of the propaganda of powerful Israeli lobbies in the US, Britain, the European Union, South Africa and other countries. The authors shine light in Part 7 on the role of Zionist lobby groups such as the American Israel Public Affairs Committee (AIPAC), the Anti-Defamation League (ADL), and various Jewish Boards of Deputies and Zionist Federations and how they have prevented honest discussion of the Israeli-Palestinian conflict.

Exploiting the corrupt political systems in most Western societies, especially the US and Britain, Jewish lobbies have established strong influence in many Western governments. The US Congress, in the word of political commentator Pat Buchanan, is dubbed “Zionist occupied territory.” The British Parliament is hardly better although there are now important voices challenging the Zionist narrative. The Zionist manipulation of media, whether in Britain, the US and Australia is discussed in the next section. Rupert Murdoch’s media empire — The Times of London, Sky News, the now-disgraced and defunct News of the World in Britain; and the Wall Street Journal, Fox News and New York Post in the US — habitually peddles Zionist propaganda.

The effectiveness of the Boycott, Divestment and Sanctions (BDS) campaign, Palestinian and their supporters’ efforts to use the law to press charges against Israeli politicians as well as generals as war criminals are discussed in the next two parts. No Israeli-Palestinian conflict discussion would be complete without addressing the issue of two-states versus one state. Finally, the impact of Arab Spring/Islamic Awakening on the Palestinian issue is also discussed.

The authors address important issues related to the Israeli-Palestinian conflict, and eloquently answer the question, “Why Israel?” They show how Israel’s corrupting influence on global politics, economics and morality is also tainting the Jewish people, a proud people who have made valuable contribution to humanity’s progress through the ages. Like Apartheid South Africa, the Israeli apartheid regime also acts as a cancer. Through global cooperation, the cancerous Apartheid regime in South Africa was eventually removed, leading to a just resolution between all peoples. A similar effort is needed to remove the apartheid regime of Israel so that peace and justice can be achieved for all the people in the region.

By initiating discussion, this powerful book forces the debate into the open about Israel as an occupier, colonizer, and racist entity. The central issue in the Israeli-Palestinian conflict has always been the dispossession of the Palestinian people from their land and property, and the denial of their right to return to live in peace and security as equal citizens on their land.

Suraya Dadoo and Dr. Firoz Osman must be thanked for taking up this challenge in a very effective manner. It is bound to generate discussion on a topic that needs open and thorough airing so that the truth can be separated from falsehood.

Why Israel? Hardcover available from these online stores in South Africa