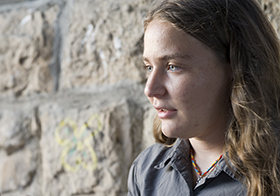 Sahar Vardi (24) is an Israeli conscientious objector. She grew up in Jerusalem.

“I was active in anti-Occupation protests from the age of 12, so by the time I was supposed to be drafted (into the army) it wasn’t even a question for me, having personal relationships with Palestinians and just being able to see Palestinians as comrades in the struggle.”

Another part of her decision was influenced by “the huge gap between what my education system and the world around me tried to perceive reality to be, and what you actually see when you cross the Green Line into Palestinian neighbourhoods”.

When Sahar was 13, she visited the Palestinian village of Nuenam with her father, where they took part in a small action of planting olive trees, changing water pipes and painting buildings in the village. Sahar stayed in touch with the village residents and a year and half ago they called to say they had a problem.

The village has its own check-point. The check-point keeps them in the Jerusalem part of the fence but the residents are West Bank identity holders- which means they’re isolated from the world.

One day there was a sick horse in the village, so residents took her out to the vet. When they tried to bring the horse back in, the soldiers said, “I’m sorry, she’s not on the list.”

Witnessing incidents like these which had nothing to do with security had an impact on Sahar.

Sahar grew up in a home where she always knew her family were against the occupation. It was her visit with her father to the village of Nueman in 2003 (during the Second Intifada) that was a turning point for this young woman, “Because it was a critical political moment -when Israel began building the fence- my father and I both went through a radicalization process through that village, and through seeing more and more of the daily realities of Palestinians.

“It was a moment in time when you could see the occupation manifesting itself through a cruel and brutal way.”

This visit to the Palestinian village when she was only 13 was the beginning of her understanding of what the realities of Palestinians actually look like, and of how much of what the military does is not about security or defence,

“It was the beginning of an eye-opening experience which hasn’t yet ended,” said Sahar, “I don’t think we as Israelis can ever really understand what it means to live in an occupation. We can see it, can feel certain aspects of it…but I can’t understand it because I go through a check-point, I smile, no one asks me for identification- because I’m white.”

Sahar is concerned about the effects of militarisation on society. While she acknowledges militarisation has the biggest effect on Palestinians who live under it, she also draws attention to the consequences on the Israeli society, specifically on the culture system. In Israel, the best contribution you can make to your society is through military service, “Your citizenship or loyalty is based on your military service.”

Another grave area of concern to Sahar is her country’s militarised economy- one of Israel’s biggest exports is military trade, “That means our whole economy is dependent on that, which means we have to maintain the occupation to maintain the good name we have in the international arms industry.

“The Israeli occupation continues because we can sell these weapons, because someone else is going to buy them and use them somewhere else.”

Participating in international conferences where she was able to connect with and speak to activists from around the globe has led to Sahar’s realisation that armies in different countries use the same tools to recruit soldiers- and to create a societal culture where soldiers have impunity.

The reaction of Israel to force is extremely aggressive, says Sahar.

How can nonviolent action assist the Palestinian struggle? Sahar believes that attempts at nonviolent resistance are a very strong and important tool that Israel doesn’t know how to deal with, which is “probably the best proof that it has a chance to work”, she adds, “Israel is terrified of it. They don’t know what to do because you can’t shoot everyone that is calling for something nonviolent. There is an international community that allows Israel to do a lot of things- but it does have a red line.”

Shireen Mukadam is a writer and researcher based in Cape Town, South Africa. Shireen holds a Masters in International Affairs from the Graduate Institute of International and Development Studies in Geneva, Switzerland. She is passionate about promoting social justice and the protection of human rights.