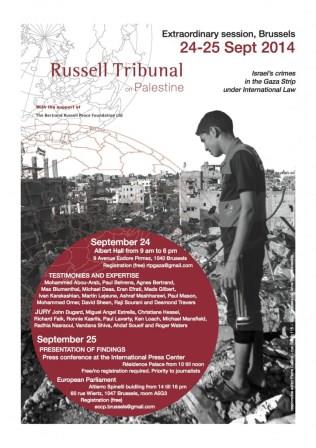 Former South African government minister and liberation stalwart, Ronnie Kasrils, will join judges, legal scholars, United Nations officials, journalists and cultural luminaries who will gather in Brussels next week to examine Israeli war crimes, crimes against humanity, and – for the first time regarding Israel –  the crime of genocide.

An emergency session of the Russell Tribunal on Palestine focusing on Israel’s most recent military operation in Gaza ‘Operation Protective Edge’ will meet in Brussels on 24 September.  Expert witnesses at the session include munitions specialist Colonel Desmond Travers, former IDF soldier Eran Efrati; Norwegian surgeon Mads Gilbert who was on the front-line at hospitals in Gaza. Members of the Israeli and Palestinian media, and NGO’s are also scheduled to testify before the jury.

The jury and witnesses will then be received the following day, at the European Parliament where they will present their findings about Israeli war crimes, crimes against humanity, genocide, legal consequences, and third state responsibilities. They will also address a message to the UN General Assembly for its reopening.

Modelled entirely on the International War Crimes Tribunal, the Russell Tribunal was first established by British philosopher, Sir Bertrand Russell, in 1966 to inform and mobilise public opinion against US involvement in the Vietnam War. From 1974 to 1976, the tribunal focused on human rights violations in Argentina, Brazil, and Chile. Since 2010, the Tribunal has focused on Israel human rights violations. The Tribunal is not a court of law, but a tribunal of the people. The jury actively investigates an accusation to determine whether there is substance to it, before considering whether it merits a trial, with international law serving as the legal frame of reference.

According to Archbishop Emeritus Desmond Tutu, who opened the Cape Town session of the Tribunal in 2011, the Russell Tribunal on Palestine is an important civil society project to hold Israel to account. “Civil society must step into the breach, as it did in South Africa’s struggle against apartheid,” said the South African icon.

Media Review Network (MRN) welcomes this bold initiative from the Russell Tribunal #RTPgaza , and hopes that the evidence presented in Brussels will find its way to the International Criminal Court, where Israeli war criminals can be legally accountable.  MRN researcher and Why Israel? Co-author, Suraya Dadoo, will be attending the Russell Tribunal, and is available for media interviews and statements.