Global Solidarity With Palestinians: From Psychological Support to Political Change 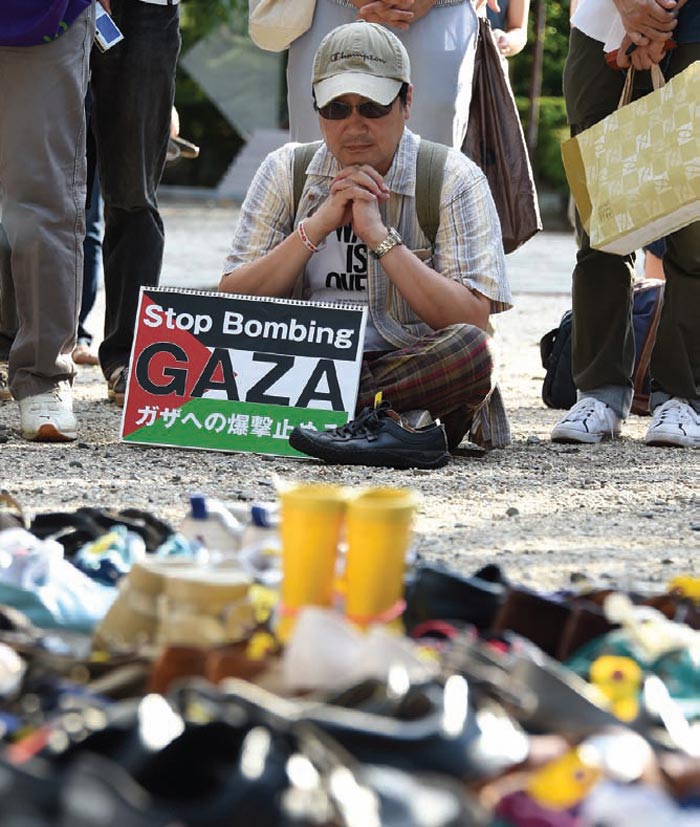 As the hundreds of thousands of people around the world who protested the massacres in Gaza retreat into inertia, hypnotized by news about the cease-fire and the Gaza reconstruction conference, a more insidious process of Israeli land confiscations, settlement expansion and control over Jerusalem’s holy places continues to erode Palestinian life. Lynch mobs of young Jewish Israelis continue to organize themselves in preparation for another attack on Palestinians, and the Israeli military enjoys impunity for its war crimes in Gaza. To Palestinians, the cease-fire means a return to being the blind spot of the world’s conscience—a less dramatic assault on life’s freedoms, with its daily humiliations and oppression.

The parroting by world leaders of “Israel’s right to self-defense” causes further injury to Palestinians, given all the hostility and violence inflicted on us. It’s no wonder that Palestinians experience the outside world as biased, selfish and complicit in harming us. Indeed, just as a rape victim feels doubly traumatized by the indifference of the bystander, Palestinians feel betrayed by the world’s silence. Like the rape victim, Palestinians need and deserve not only the sympathy of the individual but the delivery of justice.

But thanks to all those who demonstrate on our behalf, recognizing us and validating our experience, letting us know that we are seen and heard, our belief in the fairness and goodness of others is not completely destroyed.

International solidarity with the Palestinians helps assuage the psychological pain and alienation caused by Israel’s relentless dehumanization and the world’s apathy, denial and denunciation. Local and international initiatives that help Palestinians survive, recover, attain their freedom and sustain their struggle facilitate engagement and restore a sense of health to Palestinian society and protect against despair and extremism. Palestinians are, in fact, fond of internationals; it is never in Palestine that internationals are kidnapped and beheaded!

While demonstrations provide Palestinians important psychological support, and an opportunity for dem­onstrators to vent their objections and frustrations, they so far have failed to change our political reality or prevent a future massacre against us. Israel does not respond to moral condemnation, and Washington’s support for Israel goes beyond political statements to financing Israeli military aggression with Americans’ tax dollars.

In the face of our political leaders’ deafness, solidarity acti­vists must work to gain momentum and adopt innovative strategies and tools. This will require a global as well as regional grass roots commitment to the well-being of the Palestinian people, involving active and long-term mobilization of ideological, judicial, political and economic solidarity.

It is imperative to build on the instinctive, immediate, reflexive feelings of empathy and solidarity to achieve a more long term, sober and strategic globalized solidarity movement that can act as a unified entity governed by mutual cooperation. Such an entity can create alliances and coalitions among different groups, and orchestrate, multiply and augment the impact of the solidarity movement. Not only can it serve as an umbrella to many individual sympathizers—Arabs, Israelis, Germans—who, intimidated in their own societies, are unable to establish solidarity organizations there, but it can protect them and facilitate communication between them and their own governments.

Global solidarity requires a horizontal (preaching to the non-converted) as well as vertical (creating access to power) network of associations. While the former aims to achieve an improved level of literacy regarding Palestine in the face of an international public intoxicated by Israeli propaganda, the latter requires formal training on advocacy strategies (e.g., media campaigns, public speaking, lobbying and social media) of a smaller group focused on legislation and other institutional decisions.

Solidarity with Palestinians means uniting and binding together, based not on family, religion, ethnicity or class, but on shared values and a common goal of liberating Palestine from occupation, restoring justice and human rights to Palestinians, and holding Israel accountable to international law. Solidarity requires learning to work in spite of and through our divisions, as well as the commitment of people who don’t share our pain or life conditions but refuse to be either passive or active collaborators in our oppression—people who view the liberation of Palestine as integral to their own self-liberation.

I have met many of these passionate, sincere people, and am convinced that learning how to effect political change will protect many of them from burnout. There is no single recipe for solidarity—as the French say, “Chacun fait sa cuisine interne,” or everyone creates his own worldview—so just as I ask people in solidarity to let Palestinians choose their means of resistance, it is important to respect the choices of the means of solidarity of the citizens of each county: they know best what works for them. It is important, nevertheless, to be flexible and open to consultation and collaboration with others.

Basic to the establishment of a global solidarity movement is encouraging partnership and teamwork with Palestinian professionals, academics, activists and educators, so that solidarity actions are sensitive to the needs and culture of Palestinian civil society, and helping Palestinians to disseminate their narrative, aspirations and point of view to a wider world.
Crisis as Opportunity

Palestinian national cohesion is the prerequisite for global solidarity. The partition of Palestine’s political parties that occurred in the wake of our 2006 elections, and which has been exacerbated by external political and financial aid provided to some Palestinians and not others, caused significant damage to Palestinian morale and values, and has likewise fragmented solidarity efforts with Palestinians.

But the brutality of Israel’s latest attack on Gaza created a spontaneous, passionate and popular feeling of national unity, which the Palestinian leadership had no option but to join. This, therefore, is an opportunity for Palestinians to build on their rejection of polarization, incitement and intimidation, and to invest in the vigor and vitality and mobilization of energies and achievements in various spheres of life. The steadfastness of our compatriots in Gaza elevated the morale of the people and improved levels of social cohesion and trust. Trust in turn generates teamwork and mutual cooperation, and increases the level of national identity and the desire to participate in public life.

During Israel’s assault on Gaza Palestinians did not identify with the positions of our (long-ago) elected leaders, but with the resistance. As a result, the majority of Palestinians now challenge the Palestinian Authority, reject its coordination of security with Israel, and demand it take our case to the International Court of Justice. For this energetic response to continue, to be more than just a temporary reaction. It is crucial to support the growth of fully responsible democratic institutions within Palestine that will coordinate governing and self-sustaining economic structures in a wise, efficient and responsive manner. Adherence to the principles of meritocracy, transparency and accountability is a prerequisite for establishing institutional reform and participatory citizenship; developing a Palestinian national charter, with the participation of all political parties, to be placed before voters in a referendum, is also a mandatory step toward consolidating national unity.
Helping Palestinians and ­Israelis Alike

In addition to promoting healing and creating political change, including preventing future attacks and furthering Palestinian liberation, solidarity with the Palestinians also will serve to diminish the thirst for revenge and pave the way for future reconciliation. Because it facilitates both personal revival and social reform, it eventually will help Palestinians and Israelis alike in a post-war era that we hope will come soon. The safety in which it envelops us promotes trust and allows for mutual acknowledgement and compassion, thereby paving the way for forgiveness and justice—the foundation of peace. ❑

Samah Jabr is a Jerusalemite psychiatrist and psychotherapist who cares about the wellbeing of her community—beyond issues of mental health.