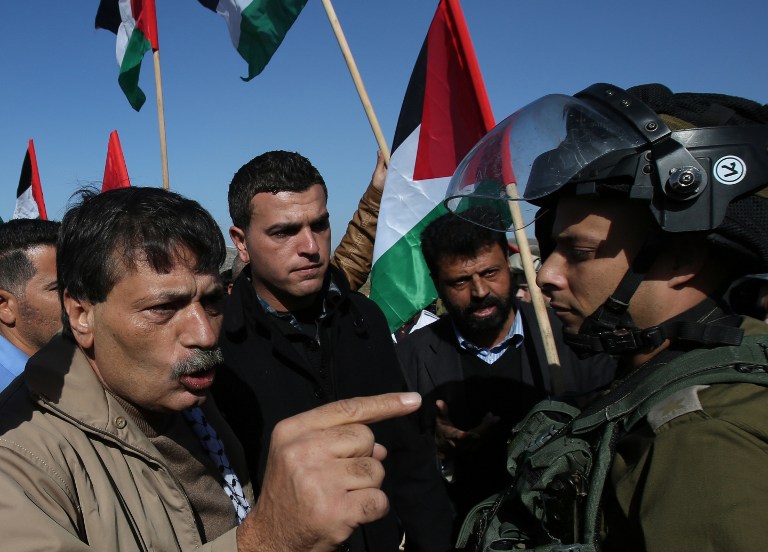 I was scheduled to meet with PA Minister Ziyad Abu Ein a few days later but he was killed yesterday by the Israeli colonization forces while he and over 100 Palestinians were trying to plant trees on private Palestinian land threatened by illegal Jewish colonies. One of his subordinates, another decent man who also belongs to Fatah told me I should meet with him because he is “different from other Palestinian Authority men”. He explained that Abu Ein is one of actions not speeches. My sister remembers him as a friend of her husband Hazem who was also a member of Fatah revolutionary council. I am ashamed to say that while I agreed to the meeting, privately I remained skeptical. Now that meeting will not happen unless it is in the afterlife. My Fatah friend and my sister were proven right about the decency of the man and Minister Ziyad joins tens of thousands who lost their lives while ACTING in the resistance to the colonial settler state of Israel. Others sitting comfortably in fancy PA offices will claim he is “the comrade” and will make speeches. I am certain Mr. Abu Ein would not want that, he would want to be honored by actions not words.

One can only hope that this tragic loss will not go in vain, that it would help awaken the decent people within Fatah so that they now remove the main block to our liberation: the Oslo accords and the security coordination that springs from it. My late friend Edward Said labeled these agreements as “the second Nakba”.  If change does not happen then the words of “leadership” that does not participate in demonstrations will remain as hollow as their words after the massacres in Gaza or after the assassination of Yasser Arafat. I have a dream that Mr. Mahmoud Abbas will wake up one morning and gather 500 of his staff and assistants (easy to do) and go to remove the illegal apartheid wall between Bethlehem and Jerusalem. I am sure he will be joined by thousands (me included) and that Israeli occupation forces will not be able to stop us.

It is not true to say that the PA is under different constraints or that they know things we don’t (including potential retaliation by the US/Israel). There must be freedom to discuss and reshape our future by ourselves without the attempts to silence the truth. At an environmental education conference, only one speaker tried to explain (correctly) that the Oslo accords gave a Palestinian cover to the Israeli theft of our natural resources like water and for the Israeli freedom to “develop” area C including industrial polluting settlements etc. This speaker was attacked mercilessly by some PA figures and by many subsequent speaker who had to distance themselves from him to carry favor with the PA. Privately though, many PA figures (including loyal Fatah members) are disturbed by the direction we are traveling. One even told me privately at the same meeting that we do not want to become known as the Vichy government of Palestine. Some of those are clearly speaking out in private to Mr. Abbas because he occasionally complains of dissension within Fatah. There is clearly a struggle within the PA and we hope that the murder of minister Ziyad Abu Ein will be the straw that breaks the camel’s back, that it will tip things towards those decent Fatah people who realize that salaries and cars are not a substitute for a free Palestine (let alone for a conscience). That way the blood of martyrs like Abu Ein will not go in vain. After all, freedom is not freely given and there must be sacrifices.

And for the rest of us mere mortals and not in any official positions: we must guard ourselves not to fall into the traps of enabling corruption or enabling lies to persist or (God forbid) following the subservient opportunists. The road we choose is important. Here are relevant quotes I like:

“The darkest places in hell are reserved for those who maintain their neutrality in times of moral crisis.” Dante

“Never doubt that a small group of thoughtful, committed citizens can change the world; indeed, it’s the only thing that ever has.” Margaret Mead

“Another world is not only possible, she is on her way. On a quiet day, I can hear her breathing.” Arundhati Roy
————–
With or without new “nation-state” law, Israel is a settler-colonial apartheid state
……We call on people of conscience worldwide to intensify BDS campaigns to isolate Israel’s regime of settler colonialism and apartheid in the academic, cultural, economic and military fields, in order to bring about Israel’s full compliance with its obligations under international law. This must include pressuring companies to end complicit business activity and institutions to divest. Pressure must also be increased on governments to finally adopt effective measures, starting with a comprehensive military embargo, as well as the suspension of free-trade and cooperation agreements
with Israel…..
http://www.bdsmovement.net/2014/with-or-without-new-nation-state-law-israel-is-a-settler-colonial-apartheid-state-12921#sthash.vx9n3HRO.dpuf

And yes, come visit us in Palestine