Resistance: Absolute For Some, Questionable For Others 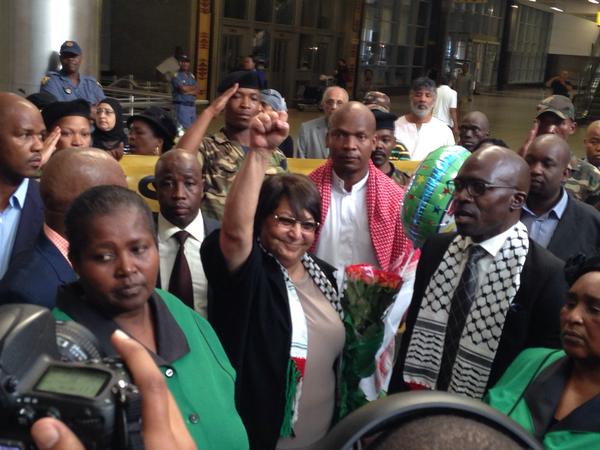 The South African Jewish Board of Deputies (SAJBD), and other Zionist organisations, are outraged about the current visit of Leila Khaled, a member of the Popular Front for the Liberation of Palestine (PFLP). So determined were these groups to oppose Khaled’s visit that they repeatedly stated on mainstream and social media that the PFLP were responsible for a gruesome attack on a Har Nof synagogue in Jerusalem – even though it is common knowledge that the Israeli authorities had already indicated that the attack was carried out by lone-wolf attackers, and not the PFLP.

What Khaled’s visit has achieved, though, is the re-awakening of the debate about the right of people to resist occupation – an inalienable right enshrined in international law. United Nations General Assembly resolutions, the Fourth Geneva Convention and its subsequent protocols, protect the right of people (including the Palestinians) to “fight against colonial domination and alien occupation” by all available means – including armed struggle.

It is this right which legitimates Palestinian efforts to lift the yoke of Israeli oppression. To this day Palestinians still have no state or armed forces. Their Israeli occupiers subject them to pass laws, curfews, expulsions, home demolitions, legalised torture, and numerous human rights violations. Yet, the Palestinian pursuit for freedom is simply dismissed as ‘terrorism’. Palestinians are always expected to apologise for and condemn Palestinian resistance, despite the lack of agreement on a definition of terrorism. The word ‘terrorism’ is readily applied to Palestinian individuals or groups who use homemade bombs, but never to a nuclear-armed Israeli state that has used white phosphorous, dime bombs, and other internationally-prohibited weapons against non-combatants.

Palestinians are often taken to task, particularly in the West, for not embracing a non-violent Gandhi strategy. “Where is the Palestinian Gandhi?” is a question often asked in condemnation of Palestinian resistance. Palestinians will tell you that their Gandhi’s are all either in prison, exile or dead.

Gandhi, however, was not always passive in his approach to resistance. He categorised forceful resistance in the face of impossible odds (such as those faced by Palestinian fighters in the face of the sophisticated Israeli military) as ‘almost non-violence’ because it was in essence, symbolic. For Gandhi, forceful resistance registered “a refusal to bend before overwhelming might in the full knowledge that it means certain death.” In the face of Israel’s high-tech slaughter and repressive measures against the Palestinians, it is difficult not to see indiscriminate and haphazard rockets falling into the category of token violence that Gandhi himself was reluctant to condemn.

Isn’t the right to resist oppression universal? Didn’t this right justify the American Revolution, the French Revolution and Africa’s wars of liberation in the 1950’s and 1960’s? Nelson Mandela is a hero because of his resistance to, not because of his subservience to, apartheid repression. The Warsaw Ghetto uprising by the Jewish population against Nazi repression is a source of inspiration in the modern history of the Jewish people, and the world at large.  Jews who joined the resistance in Poland, and other places under Nazi occupation, were, and still are heroes, not just for Jewish people – but for all justice-seeking people.

Why, then, is the right to resist domination absolute for some, but questionable for others?