Blade and Bassiouni: Tale of Diplomatic No Go? 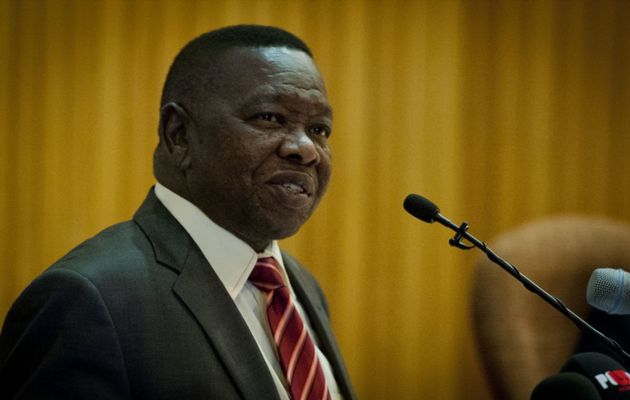 The dawn of winter in South Africa marks a drop in temperature as is nature’s norm. However, in direct contrast, temperatures are rising in the country’s diplomatic arena.

Thanks to Israel and Egypt, heat generated by their foolish actions may offset some of South Africa’s harsh winter cold.

In the case of Israel’s rightwing regime, it has outlawed a senior South African Cabinet member of the ANC-led government of President Zuma.

Minister of Higher Education Blade Nzimande, who also is Secretary-General of the SA Communist Party (SACP), has been barred from travelling to Palestine. Israel’s embassy in Pretoria has denied him a visa thus restricting his freedom of movement.

Not only has the decision to shackle Nzimande raised anger in government circles, it has become a hot potato within the tripartite alliance which is made up of the ANC, the labour movement COSATU and the SACP.

Of course unsurprisingly, the large network of solidarity movements for Palestine welcome Israel’s arrogant blunder and view it as a golden opportunity to intensify campaigns aimed at boycott, divestment and sanctions (BDS).

Nzimande undoubtedly remains a fierce critic of Israel and has renewed calls for an academic boycott of Israeli institutions of higher learning.

This diplomatic scandal will also allow civil society to compel the Zuma administration to review its foreign policy towards Israel. As it stands it clearly is misguided and not too difficult to comprehend why.

It is impossible to pursue an equitable foreign policy which is disadvantageous to Palestine, simply because the occupying power Israel controls and regiments lives of the Occupied people. The zionist regime decides who may or may not gain access to the OPT irrespective of whether SA has a diplomatic mission in Ramallah.

Whether its the West Bank or Gaza, no one can visit these occupied territories without the consent of the occupier. In other words, whether you are a senior member of the ruling ANC, the Archbishop of South Africa or the President of any country, your diplomatic relationship with the Occupied Palestinian Territories will always be subject to the whims and fancies of Israel.

Its time to admit the inherent weaknesses in this flawed policy and reconstruct it to ensure that the freedom of movement and association of South Africans is not held hostage by any foreign entity.

This brings me to the case of Egypt. Here again, a brutal military junta has arbitrarily detained a South African citizen and blatantly held him hostage in utter disregard of his human rights.

Sheikh Abdus Salaam Jad Bassiouni, formerly of Egypt and having obtained his South African citizenship decades ago, travelled to Cairo for a family engagement during December 2014 on his SA passport with a valid visa, gets nabbed by Sisi’s security apparatus upon his landing.

Five months later, the highly respected academic, humanitarian and educationist still languishes in the notorious Torah prison without any charge.

In the diplomatic standoff that seems to be playing out behind the scenes following widespread media coverage of Bassiouni’s unjust detention, Egypt’s envoy to SA, in a display of arrogance has told officials of International Relations (DIRCO) to literally go to hell.

What is it about Egypt’s ties with SA that a low ranking functionary of the military junta is able to not only thwart efforts by DIRCO to investigate reasons why Bassiouni is being held against his will; but also to contemptuously show his middle finger?

The 64 year old scholar is diabetic and understandably his family is highly agitated knowing that without regular medication his condition may deteriorate. In fact it may have worsened already given that he had a fall and has sustained a back injury.

However unless consular access is granted to SA’s mission in Cairo, how else will his wife and children have the assurance that his welfare is being monitored and that his rights are being protected?

It may come come as a surprise to many and justifiably arouse anger upon discovering that 20 weeks later, Bassiouni still awaits contact with SA’s ambassador in Cairo.

As in the case of the SA mission in Ramallah, where the irony of diplomats unable to freely secure Nzimande’s visit is shared by the Cairo mission whose ability to provide consular assistance makes a mockery of bilateral protocols.

While the heat generated by such irregular conduct may not be enough to shield us from winter’s chill, it certainly injects fresh discourses into the public domain.

In the main, a debate on whether ties between South Africa and rogue regimes such as Israel and Egypt have come at a cost – especially of dignity for South Africa’s sovereignty, has become urgent.