THE UIGHUR ISSUE: EXCUSES OFFERED BY THE WAR ON TERROR 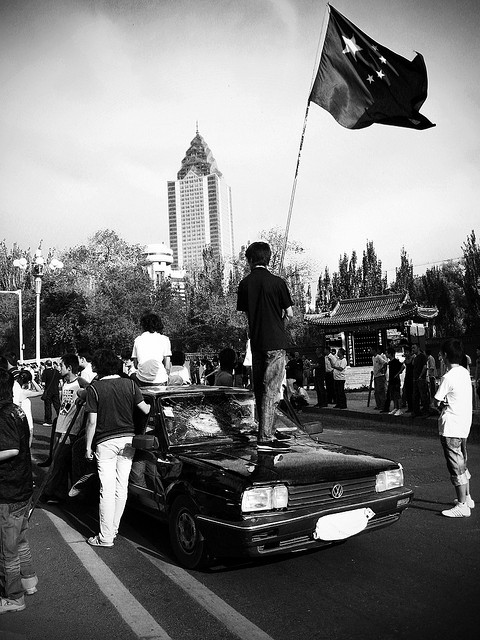 The Uighur issue is not a new one, in fact human rights violations of the Uighur population have been recorded since 1949. China’s relationship with the Uighur population of East Turkestan (Xinjiang) is one of a long standing occupation. Government sponsored mass Han migration to the province has ensured them economic opportunities which are denied to the indigenous population.
Xinjiang borders eight countries; Mongolia, Russia, Kazakhstan, Kyrgyzstan, Tajikistan, Afghanistan, Pakistan and India which makes it geographically lucrative. Extractive state corporations have historically exploited the abundant natural resources of the region yet the living standards of Uighurs remains one of the lowest in the country.
The most devastating intervention by the government was the testing of nuclear devices in Xinjiang, both under and above ground. These trials resulted not only in the pollution of the environment but also in the deaths of thousands of people due to the exposure to radiation.
Uighurs have been resisting Chinese repression for decades and despite the increase in protests since the Urumqi Massacre in 2009 the situation the Uighurs find themselves in has not improved in the least. Amnesty International reported the extensive human rights violations, among them; executions, trials without legal representation, arbitrary arrests, thousands of detentions and hundreds of disappearances, the shooting of live rounds into crowds of protestors and the use of tear gas and excessive force.
The Chinese military has always responded brutally in its confrontations with Uighurs. International post 9/11 anti-terror policies have allowed China to explain away its oppressive treatment of Uighurs by categorising them as the ‘prevention’ of terrorism, separatism and religious extremism, a convenient excuse offered by the so-called ‘War on Terror’.
Freedom of religion is entrenched in Article 36 of the Constitution of the People’s Republic of China of 1982 which specifies that: Citizens of the People’s Republic of China enjoy freedom of religious belief. No state organ, public organization or individual may compel citizens to believe in, or not to believe in, any religion; nor may they discriminate against citizens who believe in, or do not believe in, any religion. The state protects normal religious activities. No one may make use of religion to engage in activities that disrupt public order, impair the health of citizens or interfere with the educational system of the state. Religious bodies and religious affairs are not subject to any foreign domination.
However prohibitions against Islamic practice are applied more strictly to Uighurs than to other Chinese Muslims. During the fasting month authorities have been known to enact extraordinary measures to prevent people from observing the ritual fasts. There are also many rules which are generally applied to prevent Uighurs from freely practicing Islam or wearing religious attire.
Violations of these ‘rules’ often result in expulsion, fines, entries into the personal file that the state keeps on every Chinese citizen, harassment of one’s family, and administrative punishments, including short-term detention and administrative detention in China’s notorious and discredited reeducation through labor (RTL) program.
According to Alim A Seytoff, the spokesperson for the World Uighur Congress, China has implemented policies of “cultural genocide” by prohibiting the assertion of indigenous identities, banning the use of their languages, criminalizing important aspects of their traditional religious beliefs and practices and discriminating against Uighurs institutionally. By denying economic opportunities, Uighurs have been left in abject poverty, and forced to accept assimilation.
Last year Ilham Tohti, an activist and defender of Uighur rights, was sentenced to life imprisonment for ‘separatism’. His life sentence is one of the harshest in recent years for a political dissident and it includes the confiscation of his assets, a move aimed to punish his wife and young children.
Rebiya Kedeer another Uighur activist and leader was arrested, incarcerated and threatened. Two of her children are currently imprisoned for her political activities which the Chinese government sees as subversive. Many Uighur activists are currently languishing in Chinese prisons or in exile in Turkey or Southeast Asia unable to return home.
Over the past two years hundreds have died in clashes in the region and despite the government’s best efforts to package the violence as ethnically motivated it is clear that the Uighur minority is being oppressed in their homeland.
It would serve China well to not fall into the common western trend of labelling any dissent ‘terrorism’ and any killing of Uighur’s as the ‘foiling of a terror plot’. The reality is that many Uighur’s have and continue to flee the repression under which they are forced to exist. Those attempting to flee are usually met with the regime’s barbaric policy of shooting people dead before any judicial interrogation occurs.
Thailand has been harshly criticised by the United Nations, the European Union and human rights groups for repatriating almost a hundred Uighurs back to China earlier this month, where activists say they will be tortured and possibly executed.
Dilxat Raxit, World Uighur Congress spokesman, said that China was “shirking responsibility for Uighur’s fleeing because of its policy of suppression. The so-called radicals are those who hope to flee China and live a stable and dignified life in a safe and free country.”
The Chinese government must stop its oppression of the Uighur population and restore their rights , more specifically their rights to freedom of religion with immediate effect , the government must further release all Uighur prisoners of conscience. Every Uighur cannot be classified as an enemy of the state by virtue of existence. The dispossession and destruction of a people’s language, culture and history cannot and will not go unchecked.
Written by: Advocate Shabnam Mayet
Adv. Mayet is a member of CAGE Africa and Protect the Rohingya
Article first appeared on the CAGE website: http://www.cageuk.org/article/uighur-issue-excuses-offered-war-terror