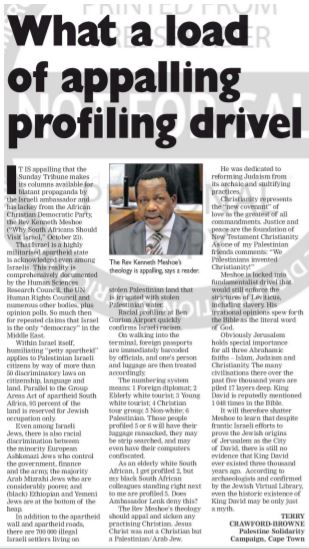 It is appalling that the Sunday Tribune makes its columns available for blatant propaganda by the Israeli Ambassador and his lackey from the African Christian Democratic Party, the Rev Kenneth Meshoe (Why South Africans Should Visit Israel, October 9).

That Israel is a highly militarised apartheid state is acknowledged even amongst Israelis.   This reality is comprehensively documented by the Human Sciences Research Council, the United Nations Human Rights Council and numerous other bodies, plus opinion polls.  So much then for repeated  claims that Israel as the only “democracy” in the Middle East!

Within Israel itself, humiliating “petty apartheid” applies to Palestinian Israeli citizens by way of more than 50 discriminatory laws on citizenship, language and land.  Parallel to the Group Areas Act of apartheid South Africa, 93% of the land is reserved for Jewish occupation only.  Even amongst Israeli Jews, there is also racial discrimination between the minority European Ashkenazi Jews who control the government, finance and the army, the majority Arab Mizrahi Jews who are very considerably poorer, and (black) Ethiopian and Yemeni Jews at the bottom of the heap.

Racial profiling at Ben Gurion Airport quickly confirms Israeli  racism.   On walking into the terminal, foreign passports are immediately barcoded by officials, and one’s person and luggage are then treated accordingly.  The numbering system means: 1 Foreign diplomat;  2 Elderly white tourist;  3 Young white tourist;  4 Christian tour group;  5 “Non-white”;  6 Palestinian.  Those persons profiled 5 or 6 will have their luggage ransacked, they may be strip searched, and may even have their computers confiscated.   As an elderly white South African I get profiled 2, but my black South African colleagues standing right next to me are profiled 5.  Does Ambassador Lenk deny this?

The Rev Meshoe’s theology should appal and sicken any practicing Christian.  Jesus Christ was not a Christian but, instead, a Palestinian/Arab Jew.  He was dedicated to reforming  Judaism from its archaic and stultifying practices.  Christianity represents the “new covenant” of love as the greatest of all commandments.  Justice and Peace are the basis of New Testament Christianity.  As one of my Palestinian friends comments: “ We Palestinians invented Christianity!”

Meshoe is locked into fundamentalist drivel that would still enforce the strictures of Leviticus including slavery.  His opinions spew forth the Bible as the literal word of God.  Whilst in Hebron, did he even take note that Palestinians are not permitted to walk along the main street, Shuhada Street, which is off-limits to Palestinians, or that an Israeli settler terrorist opened fire with an AK-47 in the Ibrahami mosque during Ramadan and killed dozens of Palestinians?

Obviously Jerusalem holds special importance for all three Abrahamic faiths – Islam, Judaism and Christianity.  However, the many civilisations there over the past five thousand years are piled 17 layers deep.  King David is reputedly mentioned 1 048 times in the Bible.   It will  therefore shock Meshoe to learn that despite frantic Israeli efforts to prove the Jewish origins of Jerusalem at the City of David (including destruction of Palestinian and other artefacts), there is still no evidence that King David ever existed three thousand years ago.   According to archaeologists and confirmed by the Jewish Virtual Library, even the historic existence of King David may be only just a myth.