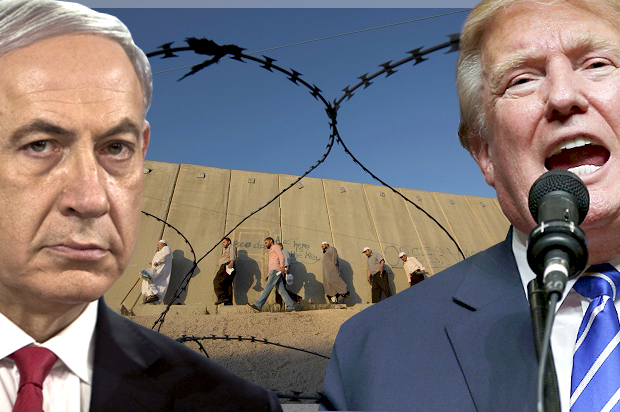 The only thing that can be said about American President-elect Donald Trump, with any degree of confidence, is that no-one knows exactly what he is going to do. Trump is a political blank slate who has run a vitriolic marketing campaign, based on free-style sloganeering around domestic issues to get to the White House. Vastly differing reactions to his election victory from the Palestinian Authority (PA) and the Israeli government reveal Trump’s erratic approach to foreign policy in general, and Palestine-Israel in particular.

As soon as Trump’s election was confirmed on Wednesday, Israeli education minister, Naftali Bennett, boldly declared  that “Trump’s victory is an opportunity for Israel to immediately retract the notion of a Palestinian state. The era of a Palestinian state is over.” In congratulating  Trump, Israeli Prime Minister, Benjamin Netanyahu, called Trump a “true friend of Israel.”

Yet, over in Ramallah, Palestinian Authority (PA) President Mahmoud Abbas – in stark contrast to Bennett – still spoke of “achieving permanent peace based on the two-state solution”  by working with “any president elected by the American people.”

The mixed messages coming out of the Occupied Palestinian Territories (OPT) and Israel on Wednesday illustrate Trump’s forked-tongue approach throughout  his campaign, and the PA’s incredible naiveté.

In February, Trump angered much of the pro-Israel community by vowing to be “sort of a neutral guy” on Palestine-Israel. Facing a backlash, Trump backtracked, promising Netanyahu that “the Palestinians must come to the table knowing that the bond between the United States and Israel is absolutely, totally unbreakable.”

A month later, he said that he would make Israel pay for defence aid, along with other allies like South Korea, Japan and Saudi Arabia. “There are many countries that can pay, and they can pay big-league,” Trump said during a press conference. He backtracked on that too.

Ten days ago, Trump’s advisers revealed his position on Israel and the peace process. If Trump wins, his advisors say, he’ll move the US embassy to Jerusalem (which Trump recognises as the undivided capital of Israel, even though the international community – including the US – regard East Jerusalem as occupied territory). He won’t condemn Israel for building illegal colonial settlements in the occupied West Bank, and might not even encourage a two-state solution.

He’ll also veto any United Nations (UN) vote critical of Israeli human rights violations, and threatened to cut off funds for the UN Human Rights Council if it calls out Israel. Trump will also attempt to criminalise boycott, divestment and sanctions (BDS) efforts against Israel in the US. According to Trump’s position paper, Israel does not even occupy Palestine: “The false notion that Israel is an occupier should be rejected.”

So, would the Palestinian cause have been better served had Hillary Clinton won? Not really. Clinton, like Trump, has  marketed herself as a staunch ally of Benjamin Netanyahu against the Palestinian people. She, too, vowed to block the BDS movement if she won.

Neither are Trump’s policies on Israel any different to his predecessor, Barack Obama. While Trump’s insistence on Israel’s continued rule over millions of Palestinians is expressed in aggressive, religious and nationalistic language, Obama’s justifications for doing the same thing were softer, sophisticated and  much more articulate during the last eight years. Trump says it clearly and openly; Obama shrewdly hinted at it. No-one in the White House has (or ever had) any real intention to end the occupation of Palestine. Republican or Democrat, Trump or Clinton, it’s always occupation, siege and Apartheid Israel that ultimately wins.

Palestinian Knesset member, Jamal Zahalka hoped the Trump victory would be a catalyst “for a change in Palestinian resistance strategies, an end to waiting for American relief.”

American-based Palestinian activist, Ali Abunimah, believes that it has. “The Palestinian cause has already shifted to a struggle for equality against occupation, settler-colonialism and apartheid, all of which is anchored with support from Republicans and Democrats.” Americans, says Abunimah, must rally from their despair, keep organizing and fighting for their own rights and the rights of people around the world.

While its own anthem proclaims the United States as “the land of the free and the home of the brave”, its leaders (past and present) consistently affirm, maintain and support occupation, Apartheid and siege. As the victory celebrations continue, and the world braces itself for President Trump, the people’s global struggle against the Israeli occupation of Palestine must continue.

Suraya Dadoo is a researcher for Media Review Network, a Johannesburg-based advocacy group. She is also the co-author of Why Israel? The Anatomy of Zionist Apartheid: A South African Perspective (Porcupine Press, 2013). Find her on Twitter: @Suraya_Dadoo.