The DNA under the Rubble. 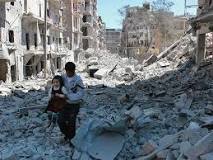 Underneath the twisted metal and blood spattered rubble of Aleppo lies the geopolitical debris of the Western Powers and if we may so, that of the values of Western civilization. This may sound exaggerated. Perhaps so. One may argue that  the debris of Pax Americana sounds more appropriate. But seriously, let us examine in more detail the nature of the “geopolitical debris” in the  rubble to determine whether it belongs exclusively to the corpse of  Pax Americana or its actual source- the values of Western civilization.

Some six centuries ago, Islamic scholars and philosophers such as Ibn Sina, Ibn Rushd, Ibn Farabi, Imam Muhammed Ghazali, then teachers to the world,  from the great centers of learning in  Aleppo, Damascus and Baghdad, preserved, translated  and synthasized from Arabic to Latin,  the works of past civilizations of India, Persia, Babylon and China through  the prism of the Al Quran as the source of  Divine Revelation.

Such scholars of Arabic sat with Jews and Greeks, Spaniards, French and German  in the important centers of Toledo, Palermo, Barcelona, Toulouse and Sicily,  and freely presented to them the brilliant and synthesized works of science and philosophy. It was in fact the first great internationalization of scientific and philosophical knowledge.  Arabic scholars demonstrated for the first time in human history that learning and knowledge have no frontiers, that it is universal, global and a human right concerning mankind as a whole, without distinction of race, language, class or religion.

They influenced the students of Europe such as Pope Sylvester 11, Roger Bacon, Albertus Magnus and Thomas Aquinas who in turn became accomplished scholars of the European Renaissance.

Tragically for mankind however, in ignoring revelation and embracing reason and science alone, Europe, as the incubator of Western civilization,  embarked on a misplaced journey of conquest and acquisitions, a path of imperial selfishness without compunction. The great traditions of religion, community,  and family were overthrown at the dawn of modernity. All such theories as Liberalism, capitalism , communism, socialism, fascism, nationalism, statism, secularism and nazism were conceived as artificial ideological constructions by people who interpreted and acted, in various ways, such as ‘the death of God’ (Friedrich Nietzsche), the ‘disenchantment of the world’ (Max Weber), ” situational ethics” (Jean Paul Sarte) and the ‘end of the sacred’.  This constituted  the core of the central values embraced by  modern Western civilization:  man came to replace God, philosophy and science replaced religion, and the ” rational, forceful, and technological constructs took the place of revelation”.

For almost four centuries, theirs has been a road map of genocidal wars in the new frontiers of America; of mass  killings of the native inhabitants of South America; of  Spanish Conquistadors;  of the British, French, Dutch, Belgian, and Portuguese colonizations of the populations of Africa, India and Far East; of the soul destroying opium trade to China; of acquiring  unprecedented wealth for themselves extracted from the colonized states, (both in  human subjugation  and plundered  resources) and of huge technological and military advancements to sustain their way of life.

The objective facts, before the full daylight of history,  show a path littered with the death and suffering of millions of human beings around the world, caught in the cross hairs of these devouring Western nations, from Japan, China, Vietnam, Thailand, Malaysia, Indonesia and the Phillipines in the Far East, to all of the states of the  continent of Africa and the Middle East and to all of the states of Central Asia and South America. Even the Westphalian Model of the sovereignty of nations and non interference in their internal affairs, which they agreed upon in the Treaty of Westphalia in 1648, after a bloody Thirty Years War between them, proved inadequate to quell their devouring ambitions and led to the First and Second War World War in which no less than 60 million died and some 200 million rendered homeless.  Did any of these enormous criminal acts and tragedies stir their conscience and suggest even an iota of compassion for the victims? No. If the answer is No, does it suggest that these people and their leaders are some deviants from another planet? Again the answer is no.

They are humans like all of us, no different from the rest of the human population. Neither superior nor inferior. Just human.  But it is at this point that we need to see the ” geopolitical debris” in the rubble even closer. After the Second World War, the victors , that is the Allied Powers clung to one or other of the three artificial ideologies, viz Liberalism (embracing capitalism and free markets); Communism (embracing state monopolies, socialism); and Fascism(embracing state nationalism,  racial superiority and nazism). Liberalism focused on the individual; Communism focused on class; Fascism focused on the state and race. The proponents of each ideology fought the other to the death in the post war period.  Fascism came into the fray last and exited first. The remaining two,  Liberalism (led by the nuclear armed West, US and Nato ) and Communism  (led by the nuclear armed Soviet Union and Warsaw) faced each other for some 60 years thereafter, only restrained by the prospect of a mutually assured destruction, not only of themselves but of the entire planet. The only option open to both was an asymmetric Cold War with puppet regimes of either side used as proxies for covert operations.

Because individualism is the foundation of liberalism,  it resonated well with the strategy of appealing to liberty, democracy and open markets. Communism based on class without distinctions did not resonate with ones  innate human nature, motivated to excel, innovate and be rewarded for ones effort. Hence the urge to excel above ones class was often repressed by the State and required constant surveillance. It was therefore inevitable that Communism will collapse earlier and indeed it did when the Soviet Union could no longer sustain such an anti- human ideology that  soon  imploded from within, fragmenting the Soviet Union into 15 States. The West regarded this collapse as a victory for liberalism. Convinced in its superiority for the betterment of mankind, it proceeded to reorder and reconfigurate the International state management system as a unipolar world with the US as the sole superpower entitled to full spectrum domination and the lesser powers to accept their inferior status as members, in a multi polar regional power arrangement. Such lesser status was also the US wish for China, India and Russia (all nuclear armed). In the implementation of this new order,  US advisors and their local proxies acted swiftly to introduce, what they perceived as victorious,  liberalism  and free markets,  to a confused population of Moscow. This enabled US Jewish  and Russian Jewish

Oligarchs to state- capture Russia’ s enormous natural resources and install a captured and  a drunkard, Boris Yelsin as the leader of a disgraced and humiliated Russia and a politically bought Duma.

What manifests  to the impartial observer, of such repeated events, is the essential characteristic and nature of individualism within Liberalism as an ideology. It is that if normal need fulfilment is left unregulated by revelation, it proceeds  to evolve into uncontrolled rampant greed. Since the Western nations have abandoned revelation, it follows that the ideology of Liberalism without the salutary constraint of revelation  can only have one outcome. Why is revelation so essential to the integrity of individualism? It is so because every human being  born of a  mother’s womb is born with a soul and no human being  however mighty or low, however rich or poor, however educated or uneducated accepts that he or she is without a soul. If this is so axiomatic, it follows that an institutionalized ideology for the advancement of the individual must take cognizance of the requirements and nourishment  of the soul which essentially lies in  acts of giving, caring and compassion. While replenishment for the body of the individual is by taking, that of the soul is by giving. Where the soul is excluded, or  ignored or delegated as secondary, or regarded as a private matter of no institutional relevance to society, then Liberalism without revelation,  has no business to carry the mantle of an institutionalized  ideology for individualism, as is advanced by the West  and  forced upon societies and nations. An individual without a soul is no individual. Liberalism without revelation is therefore an institutionalized fraud.

It follows that greed unregulated by revelation has been the main driver for liberalism and free markets in the Maggie Thatcher and Ronald Reagan eras and falsely presented  to the world as a theory of success. Privatization and less government involvement in the economy was another way of saying that human greed is good because of its supposed trickle down effect in creating job opportunities. This greed that is born of individualism without faith, was presented with a moral face by the Zionist  economist, Milton Friedman and adopted by many nations. Milton  died a month before having the chance to witness his theories collapse in the Wall Street Financial Scam of 2008. Billions of savings were wiped off and hundreds of millions around the world were forced into dire poverty and hardship. The rich, the criminal banksters, the mega corporates and the Transnational Corporations became richer and the poor became poorer. These criminal enterprises and entities became more powerful than the states themselves. The states’  political institutions were bought and politicians acted in the interest of the mega rich and not in the interest of the electorate.

The foreign policies of these Western states, (excluding the Nordic Countries and New Zealand) from London to Frankfurt to Paris to New York to Washington and their minion states and puppet regimes followed the diktat of these mega- rich entities. If a resource- rich nation state did not follow the diktat of these entities, regime change, or sanctions or direct aggression under the cover of “humanitarian intervention” followed.  The nation is bombed, its infrastructure is destroyed, controlled chaos is created and sustained by proxies armed to fight each other. In the infamous words of the chuckling Hillary Clinton, ” we came, we saw and he died”. A similar mantra by an earlier Zionist captured US Secretary of State Condaleeca Rice, in her response to the Zionist genocidal killings of the Palestinians, approved it as ” the birth pangs of a new Middle East Order” . And even earlier,  the Zionist  supporting and former US Secretary of State Madaleine Albright, remarked that the sanctions against Iraq which resulted  in the deaths of 500,000 Iraqi babies “was worth it”. Such mantras of abject cruelty and indifference to human suffering, of state sponsored propaganda and fake news, of murderous proxies with fake religious symbols rented by puppets of the Western nations, of rampant horrendous crimes,  havoc and destruction in Somalia, Afghanistan, Iraq, Egypt, and Yemen have now been  stopped dead in their tracks in the liberation of  Aleppo by the joint efforts of a much wiser Russia, Iran, Syria and Turkey.  What lies in the rubble is not only the geopolitical debris of the check-mated grand chess game and deceit of the Western powers but also the  DNA  of its civilization- bare faced fraudulent Liberalism and it’s rampant evil- human greed.

The writer is a senior counsel, a keen practitioner of law, a student of religion and finance and a keen observer of international affairs for the past 50 years. 25th December 2016 hafezabubakr@gmail.com