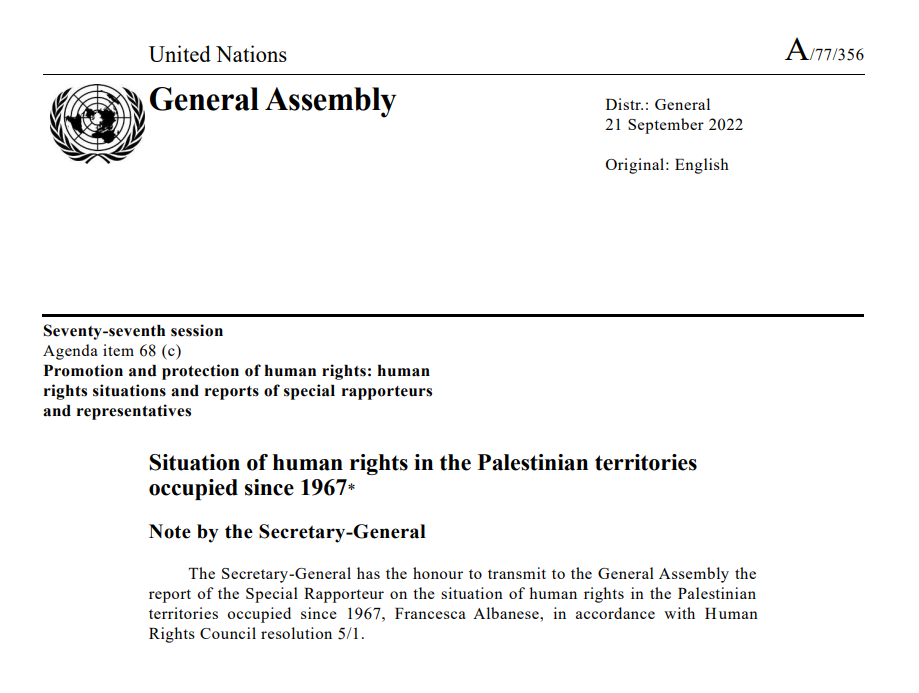 Note: A full commentary on the SR’s report is to be published by Law for Palestine soon!

The report, for the first time for an SR, focused on the Palestinian right of self-determination, and its realisation in the context of the occupied Palestinian territory, trying clarify the legal tenets, meaning and implications of this right, and how far the current reality is from its realisation.

The report starts with explaining the historical evolution of the deprivation of Palestinians from their inalienable rights making clear reference to the fact that it was in 1948 that the plight started and that “[m]ost of the residents of Gaza, together with those currently facing forcible transfer across the West Bank, including East Jerusalem, are refugees—originally from the Galilee, Haifa, Jaffa, Ramleh and Lydda and the Naqab.” The war in 1967 led to a further deterioration of human rights for those refugees, particularly in the West Bank and Gaza.

As for the question of self-determination, and ‘why now?’, the report makes a case for why the newly advanced “apartheid normative framework”-while being quite necessary to highlight the plight and the fact that it deals with Palestinians as a people– it has some limitations; if not considered as a part of “a holistic examination of the experience of the Palestinian people as a whole.”

Therefore, the report suggests that this apartheid framework, as currently applied, “bypass the critical issue of the recognition of the Palestinian people’s right to self-determination, namely Palestinians’ right to freely determine their political, social and economic status and develop as a people.” [emphasis from the source].

In the same context, the Special Rapporteur notes the illegality of the Israeli occupation (confirming the position of her predecessor, Michael Lynk, and many other scholars). The report confirmed that “[t] he Israeli occupation is illegal because it has proven not to be temporary, is deliberately administered against the best interests of the occupied population, has resulted in the annexation of occupied territory, breaching most obligations imposed on the occupying power by international law”.

Having laid these foundations, the Special Rapporteur found that “dismantling the Israeli apartheid in the occupied Palestinian territory and beyond, while necessary, will not automatically translate into the full realisation of Palestinians’ right to self-determination”. She added that, in the past thirty years, mainly following the peace process, the right to self-determination became more of an ideological slogan or a rallying cry rather than a real “legal tenet, from which no derogation is allowed, and clear legal obligations emanate.” Indeed, the right to self-determination “constitutes the collective right par excellence, and “the ‘platform right’ necessary for the realisation of many other rights.”

Establishing the Legal Framework of Self-Determination

The report goes in detail to elaborate and establish the Palestinian collective right to self-determination in international law as a people, and that without it “other rights will almost certainly not be realised”.

The International Covenant on Civil and Political Rights (ICCPR) and the International Covenant on Economic, Social and Cultural Rights (ICESCR) offered a universal codification for the right to self-determination. They included two intertwined components: a political component and an economic component. The political one ensures the capacity of a people to choose its own government and govern itself without interference; which entails an internal dimension (the entitlement of the people) and an external one (being free from external control and alien domination). The economic component is about the collective right of a people to enjoy their natural wealth and resources as an expression of permanent sovereignty over them.

The political component’s external dimension also implies the right to resist alien domination, subjugation and exploitation that may impede the fulfilment of self-determination.

A Reality Check: 55 years with no Self-Determination

Ever since the beginning of the occupation of the West Bank and Gaza, Israel started a process of de-Palestinianisation of the occupied territories through several strategies developed by Israeli strategists such as the Allon Plan.

Israel, as explains the report, followed the strategies of (1) territorial fragmentation to circumvent Palestinian unity, (2) preventing economic prosperity and means to flourishment through exploiting natural resources, (3) preventing identity through erasing Palestinian cultural and civil rights, and (4) preventing political existence (and resistance) and statehood to circumvent any chance of Palestinians being able to practice their Right to Self-Determination.

Thus, and as the Special Rapporteur put it, “[t]he way that Israel has administered the occupied Palestinian territory resembles that of a colony, ‘deeply committed to exploiting its land and resources for Israel’s own benefit, and profoundly indifferent, at very best, to the rights and best interests of the protected people’”.

The Need for a Paradigm Shift!

The report adds that the Israeli efforts and strategies have led to the situation being addressed through the following approaches: a humanitarian, political and economic ones. The humanitarian approach had international law being “used to address specific Israeli violations and to ‘improve’ certain aspects of life under occupation” rather than treat the root causes. The political approach on the other hand had the current situation being called a ‘conflict’ between two ‘opposing parties’ rather than a colonial case. This view preached for a ‘negotiated peace agreement’ “purportedly without an unconditional obligation for Israel to terminate the illegal occupation”. Finally, the economic approach was pushing for developing the Palestinian economy in isolation from civil, social and political rights. It aims at resolving the conflict by integrating businesses and creating opportunities towards sustainable development, with no regards to the fulfilment of fundamental human rights.

The report clearly refused these approaches for their apparent conflation between root causes and symptoms, and hence, normalising the occupation itself.

Therefore, the report called for a paradigm shift in the approaches “by opting for a solution premised on the respect for history and international law, starting with the cardinal norm of peoples’ right to self-determination.”

In the words of the Special Rapporteur, “No solution can be just and fair, nor effective, unless it centres on decolonization, allowing the Palestinian people to freely determine their political will and pursue their social, economic and cultural development, alongside their Israeli neighbours. The international community must embrace a more accurate diagnosis of the Israeli settler-colonial occupation in the occupied Palestinian territory and abide by its own obligations under international law to fully realize the Palestinian people’s right to self-determination“. (para 74).

Finally, the report concludes that the “Middle East ‘peace process’ and subsequent bilateral peace-making attempts have proven ineffective” due to their overlooking of human rights and the settler-colonial underpinnings of the Israeli occupation, in their approaches.

In her recommendations, the Special Rapporteur recommended that, inter alia, “third states publicly condemn Israel’s intentional violations of the Palestinian right to self-determination” including through settler-colonial practices, demanding an immediate end to Israel’s illegal occupation and return of all land and resources the Palestinian people have been dispossessed from. It demanded that the UN General Assembly develops a plan to end Israel’s settler-colonial occupation and apartheid regime by pressuring Israel to comply with international law, and that States stand ready to resort to countermeasures afforded by the UN Charter in case of non-compliance by Israel; including adopting the necessary policies to regulate business’ conduct in the occupied Palestinian territory so as to hold accountable those complicit in the settlements. Moreover, the report called for accountability through both the ICC and universal jurisdiction mechanisms.