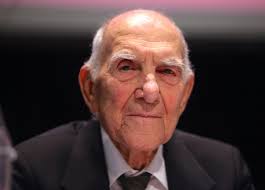 Media Review Network (MRN) is deeply saddened at the passing of Stephane Hessel, and we extend our heartfelt condolences to his family and friends.

Hessel, who was one of the co-authors of the Universal Declaration of Human Rights, has dedicated his life to fighting injustice – as a diplomat, ambassador, author, Holocaust survivor, and former French Resistance fighter. In 2011, Hessel was included in Foreign Policy magazine’s list of top global thinkers.

Hessel was also instrumental in the formation of the Russell Tribunal on Palestine, a citizen-led initiative focussing on exposing complicity in Israeli war-crimes. Hessel also served on the Tribunal’s jury for the past four sessions, and his presence will be sorely missed during the concluding session to be held in Brussels on 16-17 March.

The world has lost a true human rights icon and warrior for justice.