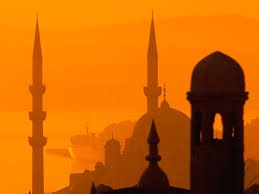 That split occurs when Western forces seek to pacify opposition from a faith that is equipped to be a enduring tool of resistance. (Sudan, Crusades, Algiers, Somalia, Afghanistan, etc).

Radicalism and fundamentalism, when they exist, and they do exist, can only be defined by authentic representatives of the faith, not by the Islamic scholars for dollars; but by the Qur’an and Hadith. We cannot live in a multicultural world where elements of Islam are first filtered for Western acceptance before being deemed acceptable. And there is no escape or propaganda that can change the core tenants of Islam, there is no degree of acquiesce in leadership that can make Islam some spiritual hocus pokus with no political teeth.

What is loosely, nebulous, hypocritically, termed the war on terror™ is a Western response to a failure of convention treatment to resistance stemming from “religious” fervor. Conventional treatment for Pan-Africanism, strains of socialism, and other social dissenting movements was be to throw money at the problem. However, this conventional treatment of trinkets for opinions fails at every conceivable level with the so-called Islamist. You cannot offer them alcohol, positions, money, not even a billion dollars, in exchange for acquiesce. Because the antibodies in the Islamist ecosystem are vulgarly intolerant to accommodating anything which remotely smells Western. What Islam, as the spiritual motivational energy, therefore represents—in its most resistant strain—is a serious impasse, an “unknown” obstacle to any imposition. As it fails to respond to conventional treatment, the West has deployed unconventional treatment. In comes the media to brand any and all forms of religious dissent (violent or non-violent) to imperialism as extremist, hardliner, radical. The nebulous nature of language mask realities, blurs objectives, so much so the sole arbiter on what constitutes terrorism, radicalism is control by one player.

And when there is a fundamentalist element in some applications of Islam, then it must be fighting a fundamentalist element in Western foreign policy. And why is Zionism, the Western created and approved system of extremist fundamentalist, which governs Israel not classified in this way? Why are the numerous occupations under Western foreign policy not labeled as a form of terrorism and extremism? It is very hard to seriously engage extremism when it does occur when disingenuous agendas labeling even seeking a Sharia state a form of terrorism–it is not, unless self-determination is no longer a human right.