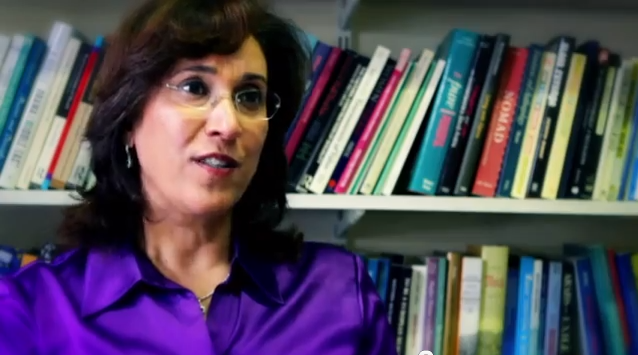 Dr. Madawi Al-Rasheed is a visiting professor at the Middle East Centre at the London School of Economics and Political Science. She has written extensively about the Arabian Peninsula, Arab migration, globalization, religious trans-nationalism and gender.

As an observer of Saudi politics she believes it’s wrong for any country to interfere so starkly in the local politics of others.

Madawi Al Rasheed’s position on Mohammed Morsi’s recent ouster is that it is the Egyptian people who must decide their future.

But as an observer of Saudi politics she believes it’s wrong for any country – and the Kingdom is not the only one doing so – to interfere so starkly in the local politics of others.

Within days of a massacre at Rabaa Adawiya mosque, not long after Morsi’s downfall, where 51 Muslim Brotherhood supporters were shot dead by the army, Saudi Arabia pledged a $5 billion package to the new Egyptian government.

Ultimately the cash gave regional support for a government that is still contested on the ground.

The consequences of this intrusion in Egypt have been difficult to contain, as has emerged over the last month, with increasingly polarised protests and military violence.

“Whoever thought about the changes that are going to take place in Egypt did not think about the long term impact” she says.

What happened in Egypt may not be down to outside intervention – there were local groups clearly opposed to the Brotherhood – but international powers can certainly take advantage and affect the direction a country takes.

“Foreign players can actually impact the outcome in a country like Egypt which is still weak economically and as a result of that is vulnerable to foreign intervention.”

According to Al Rasheed, since 2011 and the ousting of Mubarak the Saudi government has felt “nervous” at the loss of a loyal friend. “They had two or three years of planning to weaken the outcome of the Egyptian revolution in January 2011” she says.

“We have seen how this culminated in the military coup and regardless of the local dynamics the Saudis were the first to congratulate the new President and also reward Egypt in an attempt to stabilise the military.”

The Saudis weren’t serious about the money anyway, says Al Rasheed, if they were they would have volunteered it before. But “they have no vested interest in Egypt developing as a democratic country” she explains.

Saudi Arabia has maintained personalised relations with Egypt since the time of Anwar Sadat and wants to continue this way, even if doing so means muscling up to unelected authorities.

Considering Egypt is the most significant power in the Middle East, a functioning democracy there would set an example for the whole region and encourage it to spread. A reality that sends shivers down the spine of entrenched monarchies in the Gulf.

The Muslim Brotherhood combined their Islamic, intellectual background with a willingness to engage in democracy, says Al Rasheed. “This is a threat because it sets a precedent and Saudi Arabia wants to eliminate that threat, hence its support for the military coup.”

According to Al Rasheed, it was highly likely that Islamic democracy could have spread across the region; after 2011 “there was a kind of euphoria” in Saudi Arabia among the Islamists. They had watched the toppling of military dictatorships in Egypt and Tunisia give way to a Brotherhood majority in both countries.

“The domino effect would actually reach Saudi Arabia. There was a sense of empowerment amongst the Islamists as a result of the elections that took place at the time in both Tunisia and Egypt. This euphoria had to be curbed, and now Saudi Arabia has a vested interest in demonstrating to its own population the end of political Islam because it sees this as a threat.”

Saudi Arabia hasn’t always been against political Islam. It uses it for its own purposes, says Al Rasheed, until it is in danger of functioning beyond its control, which is when they switch their policy and try to curb it.

In the Afghani jihad, Saudi Arabia used political Islam for its foreign policy and its co-operation with the US and the west to guarantee the fall of the Soviet Union. In the sixties it used Islamists to defeat secular, leftist and nationalist movements.

“From the Saudi point of view, Islamism is instrumental. If it can use it for its own legitimacy and its own purpose then it is fine. But the problem with political Islam is that it escapes the control of those who sponsor it most of the time, and it mutates, and therefore it has become very difficult to use it in ways that enforce Saudi legitimacy and interest.”

What has become apparent with recent events in Egypt is that Saudi Arabia was able to co-exist with Islamists, but only when they were in the opposition. As soon as they reached power they became a resounding threat. Saudi Arabia is not governed by religious or moral criteria, says Al Rasheed, they are simply powered by their own interests.

It’s not just Saudi Arabia that offered financial compensation to Egypt shortly after Morsi’s downfall. Kuwait and the UAE followed closely behind with a further combined $7 billion.

“What we have here is a very bizarre polarization in the Gulf” says Al Rasheed. Whilst Qatar support the Arab Spring, especially Egypt and Tunisia, Saudi Arabia very much rejected the outcome and warned that there would be chaos.

“This created a schism in the Gulf itself and Qatar was the odd one out.” Saudi Arabia aligned itself with Kuwait and the UAE to isolate Qatar and limit its rise to eminence and international and regional forums.

Since Qatar has not responded, apart from continuing to support the Muslim Brotherhood in Egypt, “it’s clear that Saudi Arabia wanted to minimise the rise of Qatar as a regional player.”

The other issue is Turkey, says Al Rasheed. “It’s a matter of time until the relationship between Saudi Arabia and Turkey deteriorates.” Turkish leadership is affiliated with the Muslim Brotherhood and the Islamist movement in general.

Recently, a series of articles in the official Saudi media condemned Turkey’s position. They refuse to recognise the outcome of Morsi’s ouster, and continue to denounce the killing of protestors in Cairo.

The Americans, says Al Rasheed, have mainly left the EU to deal with Egypt whilst they focus on Israeli-Palestinian negotiations. Though they are still providing military aid “which gives an implicit message that they would like to see the situation continue as it is.”

“Let’s face it” she continues “Egypt for the Americans is basically a concern over the relations with Israel and the security of Israel because this is the most important thing from the American point of view.”

Another country tangled together with the Kingdom is Syria. Recently, Saudi Arabia called for a ceasefire, particularly over Eid, as the bloody war there continues.

According to Al Rasheed, Saudi Arabia’s goal is to win a battle against Iran in Syria. “They had coexisted with the Assad regime for three or four decades and they couldn’t face Iran in the Gulf, they couldn’t get the Americans to help bomb them, just a proxy war with Iran in Syria, which is unfortunate for the people there.”

It’s not just abroad that Saudi Arabia is stirring up controversy, nor is it just among Islamists. Raif Badawi, founder of the Free Saudi Liberals website, has recently been sentenced to seven years in prison and 600 lashings for undermining public security and ridiculing Islamic religious figures, “an unfair trial and unfair outcome” says Al Rasheed, designed to prevent other people from speaking out.

“I think this is a local game that the Saudi regime plays. It covers all sections of society, whether they’re Islamist or liberal. It’s almost like maintaining a balance so you imprison some Islamists but then you have to imprison another liberal in order to maintain the control that the government wants to have.”

She believes that it’s “unlikely” he will receive the lashes as it is common in the Gulf to go through this process only for the King or Emirs to pardon them. Considering there is no common criteria and standards for the judiciary “it’s very difficult to see any kind of substance in these kinds of trials.”

“It is unfortunate that those people are regarded as criminals and therefore they are pardoned” she adds. “In fact in my opinion they are not criminals, they are just simply exercising their right for free speech.”

Amongst the Saudis themselves, there are a lot of people who benefit from how the Kingdom operates, says Al Rasheed, and they’re not going to rock the boat.

But there is tension over political prisoners, which many have estimated to be some 30,000 people. There is also the issue of inflation, which has led to demand a demand that the government raise their taxes to meet the rise in food prices and other services.

The problem is that there isn’t a sign that an organised opposition on the ground is capable of challenging the situation, says Al Rasheed, but this is a reality that has been largely engineered by the authorities.

“The regime continues to divide the public and increases oppression and imprisonment for any activist of any kind, from women who demand forming free association or civil societies to political prisoners who just simply volunteer opinions to banning people for travel. All these mechanisms are important from the point of view of the regime to keep the lid on a boiling pressure cooker.”