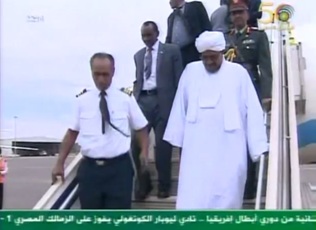 The Saudi Arabian government has yet to comment on accusations by Khartoum that it closed its airspace to the plane carrying Sudanese president Omer Hassan Al-Bashir today on his way to Iran where he was scheduled to attend the inauguration ceremony of president -elect Hassan Rouhani.
TV footage showing Sudanese president Omer Hassan al-Bashir upon his return to Khartoum airport with his delegation after Saudi Arabia refused to let his plane enter its airspace on its way to Iran August 4, 2013 (Sudan TV)
Earlier on Sunday, the Sudanese presidential spokesman Emad Sid Ahmed said that Riyadh refused to grant Bashir’s plane permission to fly across Saudi territory thus forcing him and the entire delegation to return home.

Ironically, Bashir was flying on a Saudi chartered jet instead of using one of the planes in the presidential fleet. In the past Sudanese officials say they resort to this sometimes when presidential planes are undergoing maintenance.

The flight crew was also non-Sudanese, state media said, and the plot circled inside Saudi airspace for an hour negotiating for clearance and informed the civil aviation authorities at Jeddah airport that Bashir was on board but they still declined to let it in and disconnected communications with the flight crew.

A statement on Sudan official news agency (SUNA) said that the government had already obtained prior approval but also said that the pilot “failed to provide the information related to the transit permission during the flight of the aircraft in Saudi airspace”.

The agency said that Khartoum is awaiting clarification from Riyadh on the incident and why the pre-approval was revoked.

In Tehran, the Iranian government said that Sudanese embassy notified it of the incident and while expressing regret it avoided making any reference to Saudi Arabia, its longtime regional foe.

“We were informed by the Sudanese Embassy in Tehran that one of the countries on the flight route of Mr. Omer al-Bashir’s plane did not give permission for his plane to fly over its airspace,” foreign ministry spokesman Abbas Araqchi said on Sunday.

“If it is true that this country has committed such an act, it is deeply regrettable” he said, adding that Tehran was investigating.

Karti expressed hope that the Iranian and Sudanese presidents would meet soon, the news agency added.

Observers speculated that Sudan’s growing ties with Iran could have irked the Saudis prompting them to block Bashir’s flight but a move of this nature nonetheless is highly unusual for Riyadh.

Sudan twice allowed Iranian warships to dock in Port Sudan last year, drawing concern by the United States and its allies in the Gulf.

In an editorial last November titled “The fall of masks between Iran and Sudan”, the Saudi pro-government Al-Riyadh newspaper blasted Khartoum over allowing entry to the Iranian warships, saying there is no “logical justification” for a relationship between the two countries.

It is unlikely that cash-strapped Sudan will resort to any retaliation against the regional power which is also the house to hundreds of thousands of Sudanese workers and migrants.

The incident represents a fresh and huge embarrassment to Bashir who have seen his travel difficulties mount in the wake of the two warrants issued by the Hague-based International Criminal Court in 2009 and 2010 for war crimes, crimes against humanity and genocide over the conflict in Sudan’s Darfur region.

Last month Bashir’s reportedly “fled” Nigeria where he was scheduled to take part in a regional summit over a case filed in a local court by the Nigeria Coalition on the International Criminal Court (NCICC) to compel the government to arrest him.

Officials in Abuja said despite being theoretically obliged to execute the warrant as members of the Hague- based court, they are nonetheless adhering to an African Union (AU) decision instructing members not to cooperate with the ICC with regards to Bashir.

Saudi Arabia, however, was one country Bashir frequently visited after his indictment as Riyadh is not party to the ICC statute. He even sought medical treatment there last year from a throat ailment.

A similar situation occurred in June 2011 when Turkmenistan and Tajikistan refused to give permission to Bashir’s plane in order to reach China where he was to start a state visit. As a result he was forced to return to Tehran where he was attending a summit there and decide on a new route to reach Beijing.

The Darfur Justice and Equality Movement (JEM) issued a statement today lauding Riyadh’s “noble” move to block Bashir’s flight on his way “to the landing strip of evil and international terrorism which represents imminent danger to the safety and interests of the regional and international nations”.

“The movement highly appreciates the usual stance by the kingdom and its support of the oppressed wherever they are. This position is hope for the victims of the bombing which is performed daily by Iranian weapons and aircraft against our civilian families in Darfur, South Kordofan and the Blue Nile” the statement said.

Many ordinary citizens were critical of the visit and questioned its necessity given the heavy rains and floods that ravaged parts of the country.