Israelis to turn historic mosque into a synagogue 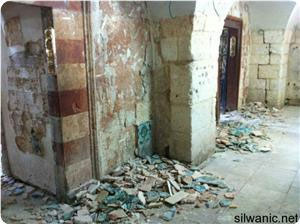 The Israel Antiquities Authority has decided to turn a historic East Jerusalem mosque into a synagogue, Haaretz has reported. The Nabi Daud Mosque was vandalised recently by Jewish extremists and the authorities plan to erase all evidence that it was ever an Islamic place of worship.
The mosque is located in the Al-Dajani neighbourhood south-west of Al-Aqsa Mosque. The Jewish vandals destroyed ceramic tiles dating back to the Ottoman era when they entered the building for the second time in two weeks.
According to Israel’s Declaration of Independence, “it will ensure complete equality of social and political rights to all its inhabitants irrespective of religion, race or sex; it will guarantee freedom of religion, conscience, language, education and culture; it will safeguard the Holy Places of all religions; and it will be faithful to the principles of the Charter of the United Nations”. Observers have noted that the Zionist state more or less disregards every one of those claims on a regular and systematic basis. The example of Nabi Daud Mosque is just one of many attacks on non-Jewish holy places over the years, they point out.