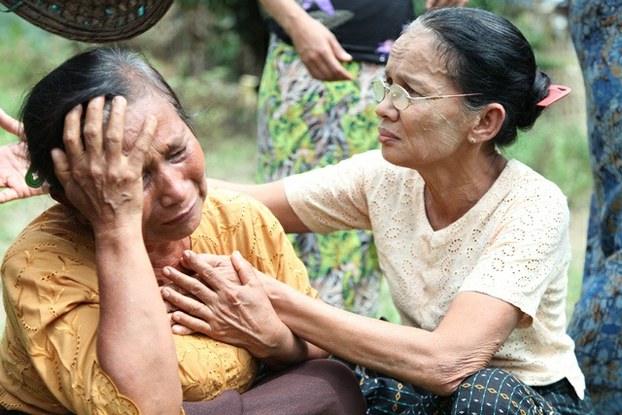 On Sunday night a mob of Buddhist residents destroyed five Muslim houses in the region’s Kyaunggon township, some 70 miles (100 kilometers) outside the former capital Yangon.

The unrest, the first reported in the region since June 2012, was sparked by allegations that a Muslim man had attempted to rape a 14-year-old Buddhist girl a month ago.

Police have arrested at least five people over the clashes, which come on the heels of similar mob violence that killed five people in Thandwe township in western Myanmar’s Rakhine state last week during a presidential tour to the coastal region.

State media reported over the weekend that police have arrested 44 people over the Thandwe attack, with reports indicating that the detainees included members of both Buddhist and Muslim communities.

On Monday, Buddhist and Muslim leaders traveled to the township to promote calm and urge members of the two communities to live together peacefully.

Prominent Buddhist monk Sayadaw Nyanissara and Aye Lwin, the Chief Convener of the Islamic Center of Myanmar, addressed Buddhist residents together on Monday afternoon and will speak to Muslim residents on Tuesday.

Sayadaw Nyanissara told RFA’s Myanmar Service before the speeches that he would be telling residents “not to be concerned about what religion someone comes from if they commit a crime, since the crime is his or her own action.”

“All religions aim for peace,” he said, adding that he would be distributing among locals information about Islam aimed at dismantling misperceptions of the religion.

Muslim residents told the Associated Press that during the clashes—in which a 94-year-old woman was stabbed to death—local police had failed to protect them a mob of hundreds of Buddhists armed with knives and sticks who went on a rampage in Pauktaw and Thabyuchine villages.

The clashes had erupted as President Thein Sein made his first visit to Rakhine state since taking office in 2011 in a bid to promote reconciliation between Buddhist and Muslim communities following deadly clashes over the past two years.

A statement posted on the website of President Thein Sein’s office last week said he was “suspicious of the motive” behind the violence which may have been instigated by “outsiders.”

The RNDP and Amyo Batha Tharthanar, a Buddhist organization aimed at protecting Rakhine ethnicity and religion, have called on authorities to release the detainees, saying Rakhines have been unfairly arrested and blamed for the violence.

“The authorities haven’t tried to get the real perpetrators, though they have arrested leaders and members from political and civil society organizations,” Amyo Batha Tharthanar chairman Nandawbatha said.

“Most of those detained were not involved in the unrest,” he said, warning that unnecessary detentions would serve to heighten tensions in the area.

The unrest in Thandwe and Kyaunggon are the latest in a series of incidents that have killed at least 45 people this year.