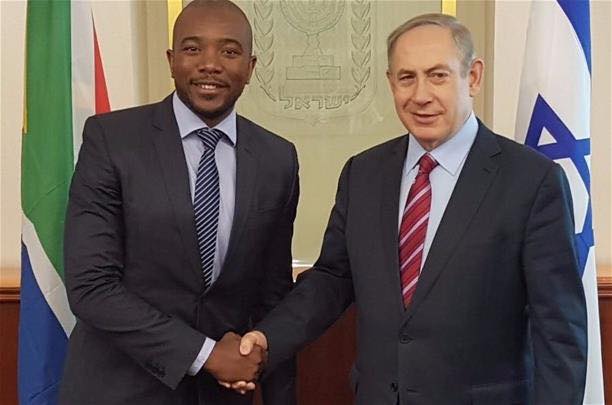 ‘Listening, learning” is what DA leader Mmusi Maimane tweeted an hour after a picture emerged of his meeting Israeli Prime Minister Benjamin Netanyahu. Maimane has defended the hush-hush junket to Israel and the Occupied Palestinian Territories (OPT), claiming he was in the region in the interests of fostering peace. For all its claims that there was equal interest in both Israel and the OPT, the actions of the DA indicated that “listening and learning” from Palestinian political representatives was simply an afterthought.

While the Israeli embassy to South Africa knew about the DA trip for a month – and even facilitated some of the meetings – the Palestinian Authority (PA) embassy in Pretoria was completely bypassed. In fact, the DA itself revealed that its unsuccessful attempt to schedule a meeting with the office of PA president, Mahmoud Abbas, was made just days before the delegation left.

So, what did Maimane and his team learn? Not much, it seems. Statements issued by the DA did not even contain the word ‘occupation’. The DA refused to acknowledge the longest military occupation in the world, now entering its 50th year.

In a Power FM interview with Thabiso Tema, Maimane could not bring himself to say the word ‘settlements’, choosing instead to speak vaguely about “certain areas” that Israel needs to “exit”.

Israel’s illegal settlements in the occupied West Bank and east Jerusalem, condemned at the UN less than three weeks ago, remain the major obstacle to peace, and have killed off the two-state solution that Maimane – along with so many others – passionately champions.

Maimane speaks of Israel’s occupation of Palestine as a “conflict” between two equal parties. As Africans, we know too well that the occupied and occupiers can never be regarded as equal.

Shockingly, Maimane went on to say that the delegation did not visit the Gaza Strip owing to Hamas’ refusal to grant South Africans a visa to visit the area. Did Maimane’s hosts not inform him that Erez Crossing – Gaza’s only gateway to the outside world – is controlled by Israel? Is Maimane completely unaware that Israel has imposed a complete blockade of the Gaza Strip – not only controlling its commercial and pedestrian land crossings, but Gaza’s sea and air space?

The DA has refused to divulge who the organisers of the trip were, the source of its funding, or name the Palestinian political representatives it met with. This, coupled with the SA Zionist Federation (SAZF) stating that it “looks forward to promoting and facilitating these ‘fact-finding missions’ through our partners and affiliates”, has led South Africans to believe that the trip was organised by South African Friends of Israel (Safi). In September 2015, Safi facilitated a “study tour” for the leaders of other opposition parties in South Africa. Bashar Masri, one of the few Palestinians that the DA has confirmed it met, also features prominently in Safi tours.

Curiously, the DA delegation was accompanied by Alan Fischer, an individual holding no official capacity with the DA, but outspoken and active in his advocacy for Israel. In 2012, Fischer was coordinator of Fairplay SA, an SAZF project tasked with combating “the assault against Israel’s legitimacy”.

Until Maimane reveals the full itinerary of this trip, South Africans will – justifiably – continue to make the connection between the DA and lobby groups whose main function is to organise propaganda tours to burnish Israel’s image in South Africa.

While the ANC has failed to transform its solidarity with the Palestinians into government policy, the DA has not been able to translate talk of even-handedness and fairness into action. Fashionable diplomacy and empty resolutions only serve to legitimate the occupation of Palestine and Israeli practices that are cruder than apartheid.