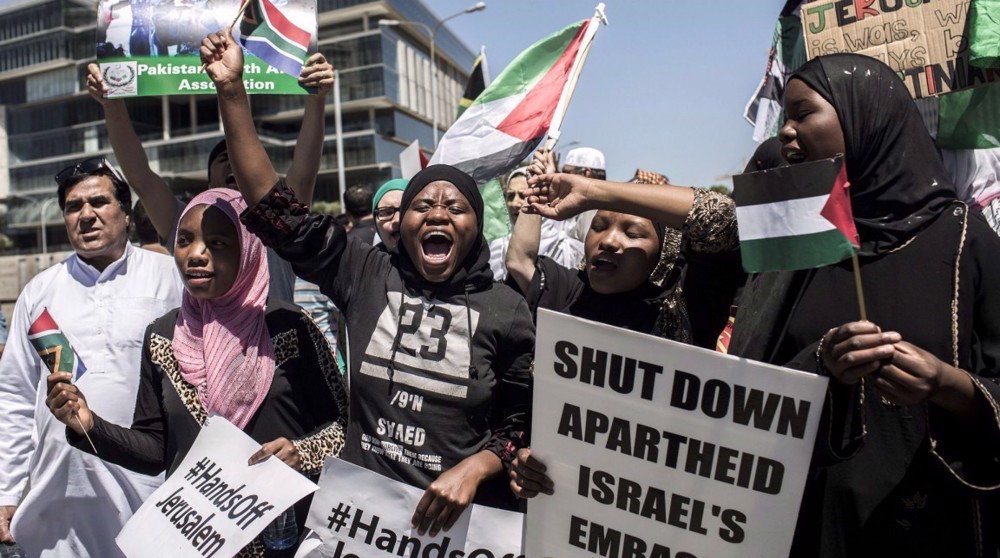 The fresh commitment by Minister of International Relations, Naledi Pandor, has been welcomed by the country’s solidarity movements backing Palestine’s freedom struggle against the occupying Israeli regime.

Though Pandor did not elaborate on the type of “direct action” being envisaged, she pitched her forthright comments by referring to recent human rights reports on Israel, describing them as “well-documented apartheid practices of Israel”.

Pandor made her remarks in the parliament during the State of the Nation (SONA) debate.

Her unequivocal condemnation of apartheid Israel following a controversy generated by President Cyril Ramaphosa’s recent acceptance of “credence” by Israel’s new envoy to Pretoria may be construed as an attempt to clear the air.

It also follows a stinging rebuke by the African Union chair, Moussa Faki Mahamat, who is seeking to justify his unilateral acceptance of Israel’s observer status, criticized countries for opposing it and yet maintaining their diplomatic relations with Israel.

Though Mahamat didn’t name any country, it was clear that he referred specifically to South Africa.

Pandor has not only been vocal in expressing South Africa’s opposition to it, but she has also been leading efforts to revoke Israel’s observer status.

Her arguments supported by Algeria and several AU member states, revolve around the AU charter which rejects colonialism, racism, and illegal occupation. By specifically singling-out Mahamat as the person responsible for granting Israel observer status, the stage was set for acrimony between the two.

“We have vehemently, as South African, opposed the granting of [African Union] observer status to Israel by the chair of the African Union Commission. Our objection stems from our own constitution and its values and the African Union charter that rejects colonialism, racism, and illegal occupation of the land of others,” she stated.

Despite her move to revoke Mahamat’s decision, the AU suspended a debate on it and instead formed a committee to study the issue. Effectively by kicking the can down the road, the tension and division within the AU will continue to simmer.

Though South Africa since the end of apartheid and the dawn of democracy has been seen as a heavyweight in continental affairs, Mahamat saw fit to point out the paradox of diplomatic ties on the one hand and opposition to observer status on the other, thus making a case of double standards.

Does it follow then that Pandor’s parliament address that talked of “direct action” was also to overcome accusations of duel standards? This can be construed from her remarks that diplomatic relations with Israel cannot be used by anyone as a reason for bringing Israel into the African Union.

“Our governing party resolutions directed us to downgrade our embassy in Israel. We withdrew our ambassador [from Israel] as part of this process of downgrading, and we are considering further measures to indicate our significant dismay at the continued apartheid practices of Israel against the long-suffering people of Palestine,” she asserted.

So while the spat with the AU remains unresolved, what is clear is that guns have been drawn. The shoot-out is on hold until the committee appointed to probe Mahamat’s decision meets sometime in the future.

In the meantime, while Pandor’s threat of “direct action” is the subject of speculation, it is expected that just as South Africa awaits its translation into substantial departure from current diplomatic relations, so too will Palestinians.

After all, the recent compelling findings by Amnesty International on Israel Apartheid, make it equally obligatory for countries to abide by international conventions on the crime of apartheid.

Iqbal Jassat is an executive at the Johannesburg-based Media Review Network (MRN), a socio-political advocacy group that concerns itself with media and political analysis.

(The views expressed in this article do not necessarily reflect those of Press TV.)

Is South Africa about to sever diplomatic ties with Israel? (presstv.ir)