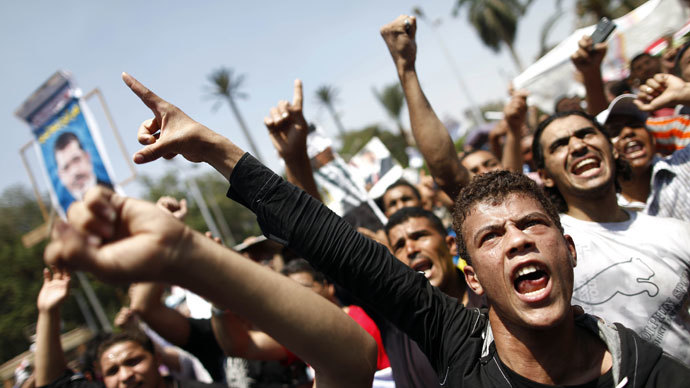 The Media Review Network is stunned at the coup de’tat that ousted the first-ever democratically-elected leader, President Muhammed Mursi, just a year into his 4-year term.

The popular uprising against the pro-Israeli and western-backed tyrant, Hosni Mubarak, ushered the hope that Egypt will enter a new era of independence, freedom and dignity. The victory by the Freedom and Justice Party (FJP), set up by the Muslim Brotherhood (MB), dismayed many Western-backed secular parties and alarmed Israel, USA, and the Arab monarchies.

Within months President Mursi and the Muslim Brotherhood were demonised in vicious propaganda media campaigns orchestrated by the remnants of the ousted Mubarak regime. Any positive changes proposed by the FJP were blocked or overturned by the judiciary, all remnants from the previous regime.

Persident Mursi repeated overtures to the opposition to join the government were rejected, and having failed at the ballot box, wish to gain power through chaos and anarchy.

The deliberate ploy to create a climate of ungovernability , fuel shortages, electricity outages, crime, arson and systematic violence of which the MB were primarily the victims, undermined the reputation of the President and the ruling party.

The military establishment, recipients of $1, 5 billion annually from the USA, and who run approximately 40% of the Egyptian economy, have been persecuting the MB for the last 80 years. In Algeria, the army massacred 60,000 people after the Islamic Party convincingly won the first round of elections, democratically-elected Mossadegh was overthrown by the CIA in Iran, and Palestinian endure a strangulating siege after Hamas won the free and fair election in Palestine.

There must be a profound disillusionment with the democratic process in the Arab and Muslim world, where victory at the ballot box by a party espousing the values of the Islamic Movement will mean facing isolation, slaughter or siege.

The MRN urges South Africa and the African Union (AU) not to condone this illegal military takeover of a democratically elected government.