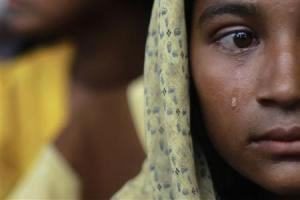 Protect the Rohingya calls on the people of South Africa and peace and freedom loving people everywhere to join our campaign, to highlight the plight of the Rohingya, by wearing black in solidarity on Friday the 5th of July 2013.

The Rohingya in Myanmar are among the world’s most persecuted ethnic minorities. The eruption of violence last year was symptomatic of a long an oppressive history of discrimination for which the Buddhist-majority government is to blame. The Rohingya are labeled illegal immigrants from Bangladesh thus rendering them stateless, despite many of them having lived in the country for generations.

Human rights violations of the Rohingya people have been recorded since 1978, when over 200,000 Rohingya fled to Bangladesh following a military campaign which directly targeted civilians resulting in widespread killing, rape and religious persecution including the destruction of mosques.

The vast majority of Rohingya refugees remain in Bangladesh, unable to return due to the negative attitude of Myanmar’s ruling regime. Despised by the Buddhist majority they are denied citizenship, education, freedom of movement, employment, the right to own property or marry without state permission and are used as forced labour on roads and at military camps. More recently there have been forced sterilisation attempts on their population by the Burmese government.

The persecution has forced the Rohingya to migrate in droves as “boat people”, risking their lives on the sea to seek work opportunities outside Myanmar and those who cannot pay for the journey will be sent to work on rubber plantations by the human trafficking rackets run by the Rohingya mafia with police connections or sold as slaves to fishing trawler owners.

Following the rape and murder of a Buddhist woman in Arakan State, Burma (Myanmar) in June of 2012, ten Muslim bus passengers were murdered. In the violence which ensued 80 people were killed according and more than 100 000 were displaced.

The displaced are living in the most terrible conditions the UN has seen in recent times and the Rohingya have been described as the world’s most persecuted minority by the United Nations.

Professor William Schabas, former president of the International Association of Genocide Scholars, says (with regard to the Rohingya’s position): “When you see measures preventing births, trying to deny the identity of the people, hoping to see that they really are eventually, that they no longer exist; denying their history, denying the legitimacy of their right to live where they live, these are all warning signs that mean it’s not frivolous to envisage the use of the term genocide.”

Protect the Rohingya is an awareness group which began in July 2012 with the aim of creating awareness and begining dialogue on the plight of the Rohingya.