Diary of SA Olympian Leigh-Ann Naidoo on The Women’s Boat to Gaza: Day 8 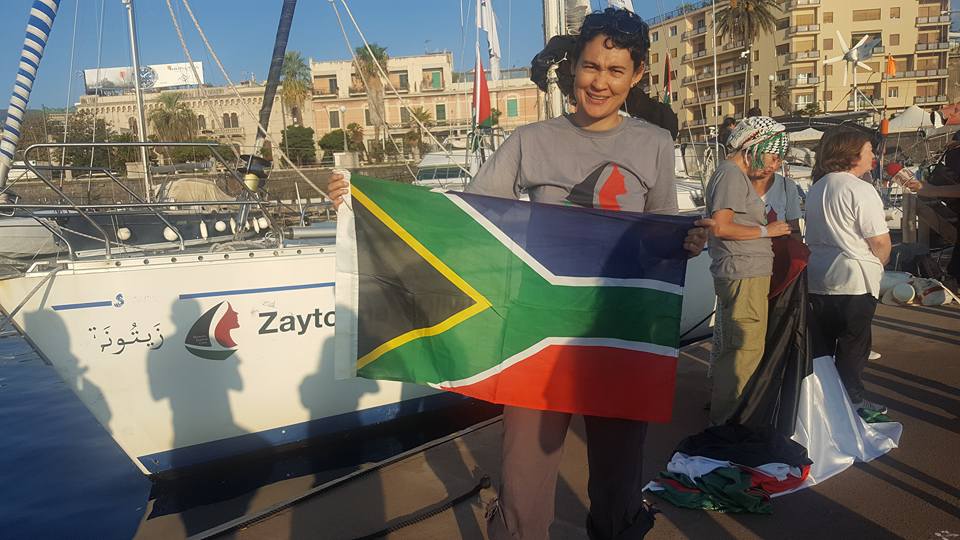 It’s just after midnight and i am about to go to sleep because i need to be up for my final 4-8am watch. Sunrise Today is when we reach the 100 mile mark from Gaza, which means the IDF are likely to be around and possibly intercept us or try and force us to turn around. Most flotillas have been stopped between 70 and 100 miles from Gaza, which is in fact quite far away if you consider that it will take us about 24 hours to sail the last 100 miles at a speed of 5 miles.

The IDF probably want to make their interception as uncomfortable for us as possible so it deters more people from doing this in the future. They also don’t want the bad press and attention they got when they attacked the Turkish boat in 2010.  What they are likely to do is to start radio-ing the captain of the Zaytouna at around the 100 mile mark at sunrise. She will not be deterred by their commands for her to turn the boat around. They will then show themselves to us by either forming a line of navy ships in our path or surround us with them. They will try to scare us into giving up. If that doesn’t work they have previously launched Zodiac boats which are James Bond looking boats ,that look like big rubber ducks, with 12-15 IDF soldiers on board all dressed in black. They are likely to board our boat and then go through all our stuff including searching the boat for whatever they think we have and that they need to find. On some flotillas passengers have been handcuffed behind their backs while on others they have been cable tied. The point is that we will be made to sit while restrained for a number of hours.

Most boats have been rerouted to the Israeli port of Ashdod where participants will be processed by different Israeli officials. Here there is likely to be a first or further interrogation. From here we will either be moved to a prison or our deportation will be done while we are being held at the detention centre. Our embassies will come to help us and our legal representatives will do the same. Hopefully our mission will highlight the unlawful and inhumane blockade of Palestine.

Even as we may not be physically able to deliver our message of solidarity to Gaza, we are still hopeful that we will. We want, more than anything, our message of hope and solidarity to reach the minds and hearts of Palestinian women. Inshallah we will make it to the shores of Gaza and if not we will come back to try again.